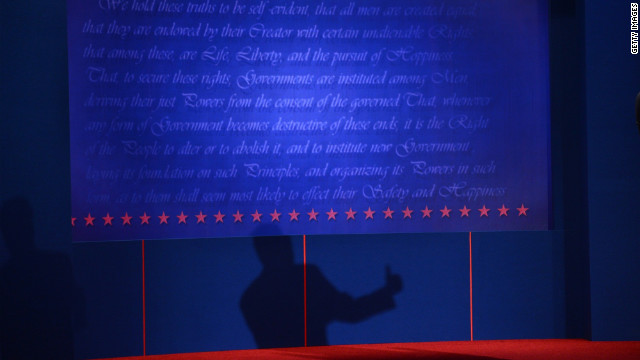 (CNN) – Wednesday night's presidential debate in Denver featured in-depth sparring on taxes, Medicare and jobs, but one issue absent from the discussion was guns.

The topic, which is almost never discussed on the campaign trail, could have made for a unique moment in Denver, a city whose suburbs have experienced two of the country's deadliest shootings over the last 15 years.

A survivor of one of those massacres said Thursday he was disappointed neither the candidates nor the moderator steered the debate toward the topic of gun violence.

"It seemed almost as if Obama, Romney and the moderator had moved on from the two horrible shooting tragedies, which took place not 10 or 15 miles from the auditorium where the debate took place," Stephen Barton said, referring to July's shooting at an Aurora movie theater and the 1999 rampage at Columbine High School, in Littleton.

"I don't think the American people have moved on," Barton continued. He was shot in the face and neck during the Aurora massacre, which left 12 dead, and was featured in a television spot pushing for a discussion on guns at the debate. The commercial, produced by the group Mayors Against Illegal Guns, aired nationally during Wednesday's event.

Barton identified both Jim Lehrer, the debate's moderator, and the candidates themselves as culpable for not raising the issue of gun control, which both Democrats and Republicans both regard as politically poisonous.

"I think part of it is the way to debate was moderated, but they had an opportunity to speak about it in closing statements and opening statements," Barton said of Obama and Romney. "It's not like they were completely restricted. It's easy to say the economy is the biggest issue and we don't have to talk about anything else, but in reality a lot of Americans want to hear about the things they would do as president."

There is a "myth," Barton said, that Americans are focused solely on the nation's ailing economy heading into November's general election.

"A lot of voters want to hear where the candidates stand. Call it a silent majority of Americans who want to hear about this," he said.

In the immediate aftermath of July's shooting in Aurora, both Romney and Obama offered condolences for the victims, as well as suspended campaign activities and stripped their ads from Colorado airwaves. Two days after the massacre, Obama flew to Aurora to meet with families of the victims.

Those gestures were all fine, Barton said, but not nearly sufficient for a candidate vying for the presidency.

"That was what he should have done, but there wasn't any follow up on the policy level," he said. "He spoke briefly on guns, but not in a really clear and specific way. Both candidates have records but we haven't heard from either one on what they would do as president. That applies to Obama and it applies to Gov. Romney as well."

The question of tighter restrictions on owning guns has been largely ignored in this year's presidential campaign, even following the rampage in Colorado and an August shooting at a Sikh temple in Wisconsin. Democrats, who in the 1990s were vocal in pushing for tighter gun laws, rarely address the issue today, and Republicans generally oppose tighter gun restrictions.

Speaking aboard Air Force One on July 22 as the president flew to meet with families of those killed in the Colorado shooting, White House Press Secretary Jay Carney said Obama did not have plans to push for new laws in light of the massacre.

Romney, in an interview with CNN's Piers Morgan on July 26, said he did not "support new gun laws in our country."

The presumptive GOP nominee added later that "the effort to continue to look for some law to somehow make violence go away is missing the point."

Neither of those sentiments was expressed at Wednesday night's debate in Denver, an omission Barton said displayed a lack of respect on the part of the candidates.