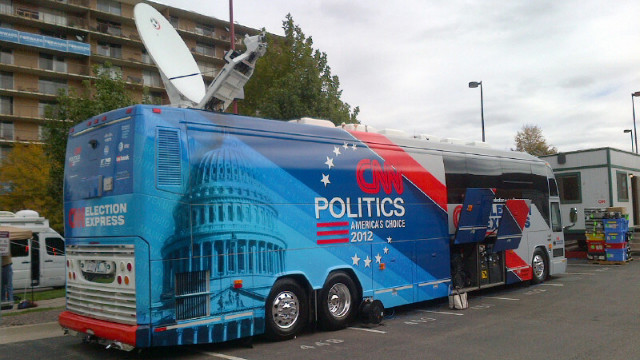 On the road again

Denver, Colorado (CNN) - "Eastbound and down, loaded up and trucking."

That's a line from a Jerry Reed song made famous in the film "Smokey and the Bandit," but it also explains what's next for the CNN Election Express.

It's the day after the first presidential debate, here at the campus of the University of Denver. The last live shots are over and the crew of the CNN Election Express is packing up and ready to make tracks towards Danville, Kentucky, site of next week's vice presidential debate.

The commander of the bus, CNN's Dale Fountain, says it will be an approximate 1,300 mile – three day trip – through what Dale describes as "America's breadbasket."

Dale says he'll head east out of Denver on Interstate-70 through Colorado, into Kansas, and through Missouri, passing by the Arch. Then it's over the Mississippi River and east into the Appalachians.

Riding with Dale is CNN Engineer Jordan Placie, the technical wizard who gets us on TV. This is the second presidential cycle where Dale and Jordan have teamed up to ride the CNN Election Express across the country.