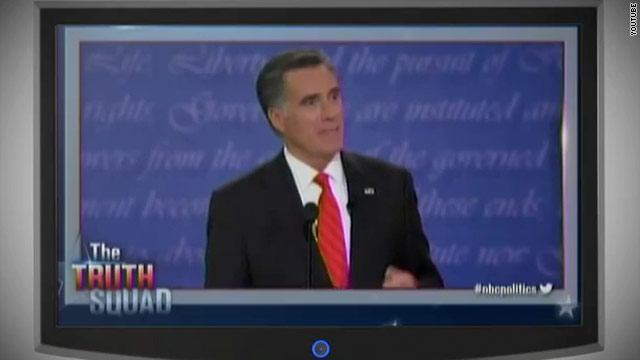 That was fast: Romney debate remarks in new Obama ad

Obama, citing a study from the nonpartisan Tax Policy Center, argued Romney's tax policies would cost $5 trillion –a claim Romney forcefully shut down during the debate.

"I'm not in favor of a $5 trillion tax cut. That's not my plan," Romney is seen saying in the ad.

The GOP nominee's campaign has consistently fought back against the study's statistic. Given that Romney has not laid out all the details of his plan, the study was conducted based on generalities from Romney's proposed tax policies.

In the debate, Romney shot back: "There are six other studies that looked at the study you describe and say it's completely wrong. I saw a study that came out today that said you're going to raise taxes by $3,000 to $4,000 on middle-income families."

The former Massachusetts governor also argued his tax cuts for the middle class would not "add to the deficit," saying he would pay for a reduction in the tax rates by limiting deductions and closing loopholes for the wealthy –though he did not specify which deductions he would eliminate.

The 30-second television ad faulted Romney for not elaborating on the details of his plan.

"Why won't Romney level with us about his tax plan, which gives the wealthy huge new tax breaks?" the ad's narrator asks.

Romney again fought back at the claim in the debate, repeatedly saying he would "not reduce the taxes paid by high-income Americans." While their tax rates may be lowered, he said, they'll be offset by the limit on deductions and loopholes.

Obama's ad, however, continued to hammer at the GOP nominee's policies, citing experts who say Romney's math does not add up and middle income earners would end up having to pay more in taxes.

"If we can't trust him here..." the narrator says over an image of the debate stage.

"How could we ever trust him here?" the narrator continues, with a photo of the Oval Office displayed

The ad, "Trust," will air in the battleground states of Colorado, Florida, Iowa, New Hampshire, Nevada, Ohio, and Virginia.