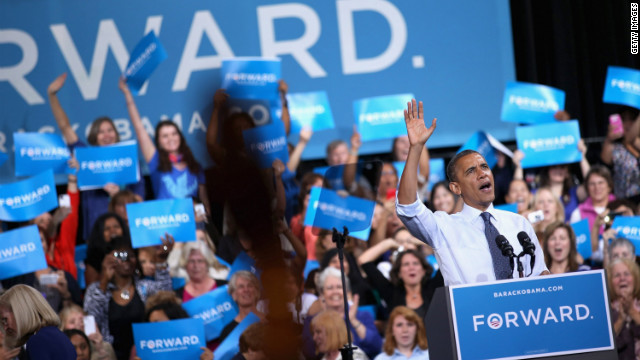 DEVELOPING: UNEMPLOYMENT RATE FALLS TO LOWEST LEVEL SINCE OBAMA’S INAUGRATION… Friday's monthly jobs report changed the picture of the U.S. economy in more ways than one, showing the unemployment rate fell to the lowest level in more than three years and hiring was stronger than originally reported throughout the summer. – Annalyn Censky

11:21 a.m. ET: President Barack Obama responds to the report at a campaign event in Virginia... “I believe that as a nation we are moving forward again. We're moving forward. Now, after losing about 800,000 jobs a month when I took office, our businesses have now added 5.2 million new jobs over the past two and a half years. …Today's news certainly is not an excuse to try to talk down the economy to score a few political points, it's a reminder that this country has come too far to turn back now.”

12:12 p.m. ET: Mitt Romney reacts campaign event in Virginia... “The unemployment rate, as you too know this year, has come down very, very slowly but it's come down nonetheless. The reason it's come down this year is primarily due to the fact that more and more people have just stopped looking for work. And if you just drop out of the workforce, if you just give up and say look, ‘I can't go back to work, I'm just going to stay home.’ If you just drop out altogether, well you're no longer a part of the employment statistics. So it looks like unemployment is getting better, but the truth is, if the same share or people were participating in the workforce today, as on the day the president got elected, our unemployment rate would be around 11%”

TRAIL TRIVIA
(Answer below)
How did Sen. Dan Quayle respond when Sen. Lloyd Bentsen delivered the memorable debate line, “Senator, you are no Jack Kennedy”?

In less than 100 key strokes this morning, we watched two generations come together as former GE CEO Jack Welch took to Twitter to accuse the Bureau of Labor Statistics of manipulating data to help President Barack Obama win re-election.

Could Welch’s assertion that government employees were outright lying about the unemployment rate to benefit Obama be true? For anyone who understands how the apolitical Bureau of Labor Statistics works, the answer is no. In the spirit of our Friday feature in which we turn to experts for insight on pressing political matters, we asked Keith Hall, who was appointed BLS commissioner by President George W. Bush, to give us his take.

What was your take on Jack Welch’s comments?

HALL: “I understand people’s frustrations and suspicion when the unemployment goes down, you know right before an election. But in reality all the federal statistical agencies, including the Bureau of Labor of Statistics, they’re independent agencies. They have a long tradition of being very professional and very nonpolitical and it would be very, very difficult to rig these numbers even if you wanted too. And it would be extremely risky to get caught trying to do that. So, there’s a long, long history of these agencies being independent and doing their best to estimate these numbers, and to my knowledge there’s never been an issue with any of these agencies changing the numbers for political reasons.”

Is there any possibility that this data could be manipulated?

HALL: “I don’t think there’s any way this could happen. There’s certainly a zero chance that this could happen and somebody could get away with. And sometimes this is the frustration sometimes – the interpretation of the data is not simple. Sometimes the data is a little bit conflicting and that’s why people I guess get their conspiracy theories, but I can tell you the Bureau Labor of Statistics is a very independent professional organization and that would never happen.”

Welch’s tweet reminded us of often-repeated phrase by the late Sen. Daniel Patrick Moynihan, “Everyone is entitled to his own opinion, but not his own facts.”

Leading CNNPolitics: Mitt's middle of the road makeover
Mitt Romney seems to be undergoing an extreme makeover - presidential candidate edition. few months ago he told donors at a Florida fundraiser that he'd never convince the 47% of Americans who he described as government-dependent shoo-ins for President Barack Obama to "take personal responsibility and care for their lives." – Halimah Abdullah

Leading Drudge: Surprise: 7.8%
The U.S. unemployment rate fell to 7.8 percent last month, dropping below 8 percent for the first time in nearly four years and giving President Barack Obama a potential boost with the election a month away. – Christopher S. Rugaber

Leading HuffPo: The Tin-Foil Hat Crew!
Following an unexpectedly strong jobs report Friday showing unemployment falling to 7.8 percent and 114,000 new jobs added, conservative media figures and one prominent business leader quickly latched on to conspiracy theories about the veracity of the numbers. Call it jobs-numbers trutherism. And for the sake of historical record, its origin was a tweet from former General Electric CEO Jack Welch. – Luke Johnson

Leading Politico: Moderate Mitt returns - but conservatives cheer
Mitt Romney sounded at the first debate a lot like what conservatives always suspected he really is — a Massachusetts moderate who supports some regulations and doesn’t want to cut taxes for the rich. And the right wing loved it. – Reid Epstein and Ginger Gibson

Leading The New York Times: Political Fight Over Jobs Numbers Begins Anew
The monthly ritual of plumbing the employment report for political advantage began anew on Friday, with Mitt Romney and other Republicans lamenting what one leader called “the new normal” of high unemployment while the White House said the lower jobless rate was proof that its policies were working. – Mark Landler

- Moderator Jim Lehrer on the first debate: I was ‘effective’… -
DEBATE MODERATOR JIM LEHRER IN AN INTERVIEW WITH POLITICO: “Based on what the goal was, I saw it as successful. I’ve always said this and finally I had a chance to demonstrate it: The moderator should be seen little and heard even less. It is up to the candidates to ask the follow-up questions and challenge one another. … I don’t consider that being passive, I consider it being effective."

- … and the debate commission defends him -
THE COMMISSION ON PRESIDENTIAL DEBATES ISSUED A WRITTEN PRESS RELEASE DEFENDING LEHRER: “The Commission on Presidential Debates’ goal in selecting this format was to have a serious discussion of the major domestic and foreign policy issues with minimal interference by the moderator or timing signals. Jim Lehrer implemented the format exactly as it was designed by the CPD and announced in July.”

- Iowa voters react to job numbers -
CNN’S SHANNON TRAVIS TALKS WITH VOTERS IN DES MOINES, IOWA, REGARDING TODAY’S JOBS REPORT:
Daniel Scholer: “It seems promising. I think that, especially with the election coming up, it’s going to be good for the Obama campaign. But I am sure the Romney campaign is going to spin it in a different direction – that maybe the drop off was a result of people dropping out of the work force.”
John Hansen: “I think any improvement in the jobs numbers is good. … I am glad it is happening possibly before the election.”
David Thayer: “If the numbers are accurate, that is always a positive thing. I don't know how you can spin it negatively but I am sure some one will.”

- Letterman gives Obama 10 excuses for a bad debate performance -
DAVID LETTERMAN JOKES ABOUT OBAMA ON HIS LATE NIGHT TALK SHOW ON CBS:
“Number 10: I haven't slept an hour since 2008.
Number 9: Romney's hair is mesmerizing.
Number 8: Didn't want to wake Jim Lehrer.
Number 7: Haven't been the same since I quit smoking.
Number 6: Honestly, I thought the debate was next week.
Number 5: I live with my mother-in-law what do you want from me?
Number 4: Kept blanking on what percentage of the country mitt's written off.
Number 3: Skipped rehearsal just like Letterman.
Number 2: Why don't you ask bin Laden how I did.
And the number one President Obama excuse...it's Bush's fault.”

Albert Brooks (@AlbertBrooks)
If Obama could manipulate job numbers wouldn't he have done it two years ago?

Benjy Sarlin ‏@BenjySarlin
Whether Romney gets a significant bump or not this week, timing is fantastic: right as early voting kicks off in IA, OH, FL

It is one of the most memorable moments in debate history – when, on this day in 1988, Texas Sen. Lloyd Bentsen told Indiana Sen. Dan Quayle that he was “no Jack Kennedy.”

“I have far more experience than many others that sought the office of vice president of this country,” Quayle said. “I have as much experience in the Congress as Jack Kennedy did when he sought the presidency.”

“That was really uncalled for, Senator,” a stone faced Quayle responded.

The Bentsen line has stood the test of time and is still used today to check politicians who are thinking to highly of themselves. It is important to note, however, that it was Quayle who got the last laugh. We never had a Vice President Bentsen.

A number of close answers, but Evan Goldstein (@egoldstein93) was the first person to correctly answer today’s trivia question. Dennis Wedin (@denniswedin) and Tyler Rose (@trose31) were both very close and, yes Pdayjay (@pdayjay), he did spend some time just standing there.