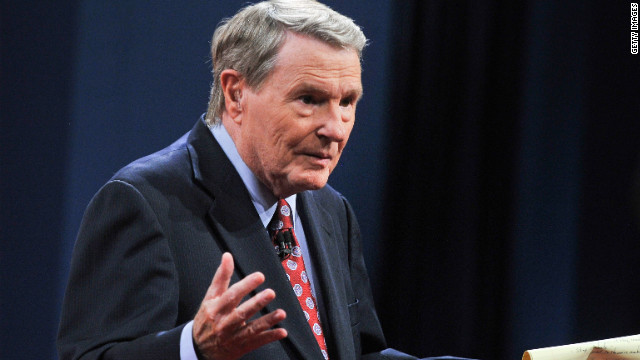 Washington (CNN) – The organizational body that has put on every presidential debate since 1987 defended Jim Lehrer after many criticized his performance as Wednesday night’s debate moderator.

In a written press release, the Commission on Presidential Debates pivoted to the debate format they implemented, stating that Lehrer “implemented the format exactly as it was designed.”

“The Commission on Presidential Debates’ goal in selecting this format was to have a serious discussion of the major domestic and foreign policy issues with minimal interference by the moderator or timing signals,” reads the statement. “Jim Lehrer implemented the format exactly as it was designed by the CPD and announced in July.”

For Lehrer, who is the host of “PBS NewsHour,” Wednesday’s debate was his 12th time hosting a presidential or vice presidential debate – the most of any other person. Additionally, Lehrer wrote a book, “Tension City: Inside the Presidential Debates, From Kennedy-Nixon to Obama-McCain,” about his numerous moderating experiences.

It was, however, Lehrer’s extensive level of “minimal interference” that led to him being panned and mocked, with the Twitter account @SilentJimLehrer launching during the debate.

The format of the debate consisted of six, 15-minute segments on the economy, healthcare, the role of government and governing. Due to the fact that Lehrer continually allowed the two candidates to go over the allotted 15 minutes, there were only three minutes left for the last category.

In an interview with Politico, Lehrer said his debate performance was “effective.”

“Based on what the goal was, I saw it as successful. I’ve always said this and finally I had a chance to demonstrate it: The moderator should be seen little and heard even less,” Lehrer said. “It is up to the candidates to ask the follow-up questions and challenge one another.”

As for his silence, Lehrer spun it another way.

“I don’t consider that being passive,” he said, “I consider it being effective.”