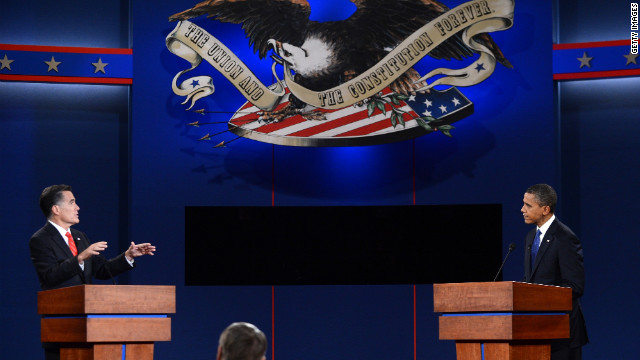 (CNN) - President Barack Obama and Republican challenger Mitt Romney sparred in their weekly addresses Saturday over whose vision and policies are best for the country.

"Under President Obama, we will have a stagnant economy that fosters government dependency and chronically high unemployment," Romney said, asking for voters' support. "But if you elect me as president, we'll have pro-growth policies that foster upward mobility, strengthen the middle class and lift people out of poverty."

Obama argued that the country was recovering from the recession and "we're seeing signs that, as a nation, we're moving forward again."

Obama was citing job numbers released a day earlier showing the unemployment rate dropped from 8.1% to 7.8% in September.

That number was based on the government's household employment survey, which found 873,000 more Americans were employed in September than August. The Labor Department's survey of employers found 114,000 jobs had been created in the month and revised upward the July and August numbers.

The unemployment rate has not been that low since the month Obama was inaugurated, in January 2009.

"On the economy, President Obama's plans for a second term all come down to more taxes, more borrowing and more spending," he said. "My Plan for a Stronger Middle Class will lead to rising incomes for everyone and create 12 million new jobs in my first term alone."

He also criticized Obama over his health reform law and handling of the national debt.

Obama did not name Romney in his address, but called for Congressional Republicans to work with him, accusing them of working instead to undo his policies.

"For some reason, some Republicans in Congress are still waging an all-out battle to delay, defund and dismantle these commonsense new rules," he said, citing banking regulations and other measures. "Do they think undoing rules that protect families from the worst practices of credit card companies and mortgage lenders will make the middle class stronger? Do they think getting rid of rules to prevent another crisis on Wall Street will make Main Street any safer?"

In the separate Republican Party weekly address, party chairman Reince Priebus argues that Obama has not done his job as president, and that Romney is better suited for the job.

"Midway through the debate, I think the president realized that he's been president for the past four years, and it was his policies and his agenda that have failed to produce any of the results that he promised us as a candidate," Priebus said.

Obama has placed campaigning ahead of holding the office, Priebus said.

"As a party chairman, I understand that the president must campaign," he said. "But he also has a job to do. While Barack Obama enjoys being president, he doesn't seem to enjoy the work required of being a great president."

Priebus went on to make the case for electing Romney, who he said is better than Obama on the economy and foreign policy.

Romney makes the case for himself Saturday when he hosts an early evening event in the battleground state of Florida.

Obama is off the campaign trail Saturday.