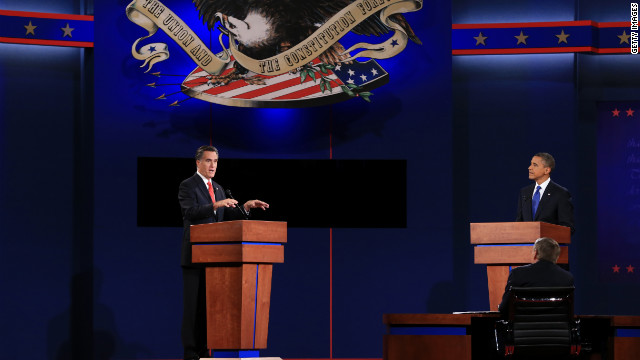 "He is saying that he is going to pay for it by closing loopholes and deductions," Obama said. "The problem is that he's been asked over 100 times how you would close those deductions and loopholes, and he hasn't been able to identify them."

But Romney maintained it would not, as he would not enact a plan that adds to the federal deficit.

Romney maintained he would not sign off on a plan that increases the deficit. CNN has rated Obama's claim as false.

The GOP candidate said he would pay for the plan in two ways: first, by closing loopholes. Second, he said, his plan would increase economic activity, resulting in increased federal government revenues.

“But in order for us not to lose revenue, have the government run out of money, I also lower deductions and credits and exemptions, so that we keep taking in the same money when you also account for growth,” Romney said.

The ad cited two other media fact checks, as well as a statement Obama deputy campaign manager Stephanie Cutter made when defending her candidate's claim on CNN.

"Well, OK, stipulated, it won't be near $5 trillion," Cutter can be seen saying in the ad.

In the interview, she goes on to charge that the plan still wouldn't balance: "But it’s also not going to be the sum of $5 trillion in the loopholes that he's going to close."

Obama's campaign on Saturday apparently stood by the claim, releasing an ad on the matter that called Romney dishonest and used footage from the debate.

"Clearly, the Obama campaign was in full damage control mode at the end of this past week. Given such a devastating record, it’s no surprise Barack Obama will say and do anything to avoid talking about his middle-class tax-hike plan," Gitcho wrote.

Romney's campaign has not said where the ad will run nor how much it is spending on the spot.