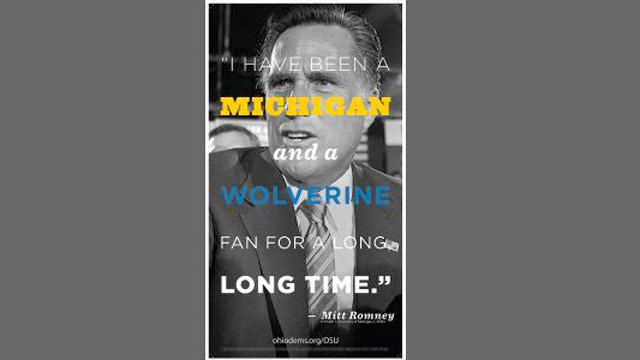 (CNN) - Ahead of stops by President Barack Obama and Mitt Romney to Ohio this week, the state's Democratic Party took out a full page ad in Ohio State University's student newspaper on Friday, reminding voters of the GOP nominee's sports team allegiance.

"I have been a Michigan and a Wolverine fan for a long, long time," the text says over a photo of Romney. The former Massachusetts governor, who was born in Michigan, made the statement last year.

The Michigan Wolverines and the Ohio State Buckeyes have long been fierce rivals. Friday's ad ran in the homecoming edition of the student paper, The Lantern.

Republicans have also had some Buckeye fun at the president’s expense. When Romney's running mate, Rep. Paul Ryan, visited a campus area sports bar in Columbus last weekend, the Wisconsin congressman did the O-H-I-O picture with fans, a tradition in which four people line up side-by-side to spell Ohio with their arms.

Ryan's campaign was quick to point out Obama had been photographed a few months earlier misspelling it. But the president got it right two weeks ago in Milwaukee, where he ran into a group of Buckeye fans at a sausage shop.
Obama is set to visit Ohio State on Tuesday.