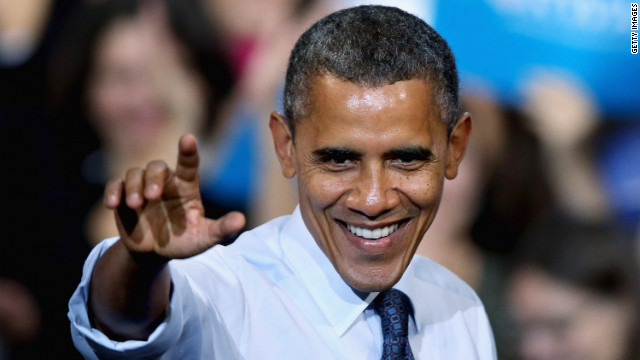 Los Angeles (CNN) – President Obama is tapping his California ATM with a combination of star-studded concerts and intimate high-dollar dinners.

The president did not attend the concert but made remarks to nearly 6,000 supporters, with tickets starting at $250.

“My understanding is it was an incredible show. These guys - and everybody here are just incredible professionals. They're such great friends, and they just perform flawlessly night after night. I can't always say the same,” he said, presumably poking fun of his own performance at last week’s debate.

Obama continued to criticize his opponent, Mitt Romney for his $5 trillion in tax cuts and plan to reduce spending.

“Obviously, the Governor knows his $5 trillion isn’t too popular, so a few weeks before this election he’s trying to pretend it doesn’t exist, because that’s a lot easier than trying to explain how he’d pay for it without asking middle-class families to pick up the tab,” the president said. “When he was asked what he'd actually do to cut spending, he said he'd go after public television. For all you Mom's and kids out there, someone is finally cracking down on Big Bird. Elmo has made a run for border. Romney plans to let Wall Street run wild, but bringing hammer down on Sesame Street.”

Obama also met privately with a dozen so-called high-dollar donors, along with former President Bill Clinton, and attended a dinner with 150 guests at $20,000 per person.

On Monday, the president heads to San Francisco, where he'll attend three fundraisers:

– And another concert featuring John Legend and Michael Franti that's expected to draw about 6,000 people, with tickets starting at $200.

In a separate event at a private residence on Monday in Los Angeles, President Clinton is expected to raise an additional $160,000.