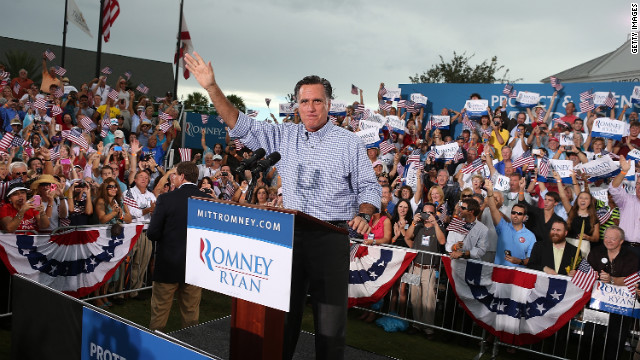 Speaking to large crowds in St. Petersburg, Apopka and Port St. Lucie, Romney opened up his stump speeches by recapping his match-up against the president.

"We had a little debate earlier this week and I enjoyed myself," Romney told a roaring audience of roughly 10,000 in Port St. Lucie Sunday afternoon.

"You all had the chance to hear his answers - or his non-answers," he continued. "Now of course, days later we are hearing his excuses, and next January we'll be watching him leave the White House for the last time."

Another new staple of his stump speech: the stories of three Americans whose deaths touched Romney. The candidate spent time each day telling audiences about helping write a will for a 14-year-old with leukemia, as well as the death of a disabled friend.

"I know something about great human beings in this country," he said. "It's that that gives me the confidence that our future will be so bright, because I've seen how Americans respond to challenge, and even to tragedy."

On Monday Romney will give a foreign policy speech in Virginia, where he is expected to criticize Obama's handling of tumult in the Middle East.

"I commit to you I will be a leader," Romney told his supporters in Port St. Lucie Sunday. "When I'm president I will take the care that it takes to rebuild our principles and restore the principles that made America so strong."

Ann Romney also worked to humanize her husband when she introduced him Sunday.