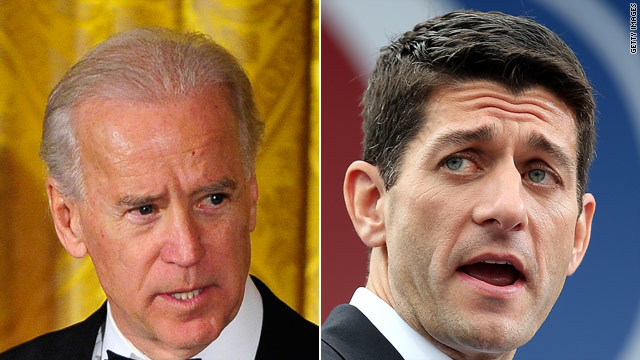 While Obama campaign senior adviser David Axelrod is on hand in Delaware, sources told CNN his presence is not a reaction to the president's weak showing at the Denver debate and that Axelrod was previously scheduled to attend. The vice president's preparations are being run by his former chief of staff Ron Klain, who is in charge of the president's prep as well.

Biden started his debate practice Sunday and will continue through Wednesday for a total of four days of prep, according to an administration official.

In last week's debate, senior Democrats said the president and his team were not expecting Romney to direct his message to political moderates. This surprise, they said, contributed to his performance.

Members of the president's team said Romney's statements during the debate about defunding PBS and Big Bird left an opening on which the president could seize. Obama has since targeted the GOP candidate over the remarks during campaign stops.

As the first presidential debate ended, senior surrogates for the Obama campaign were noticeably absent from the "spin room" where both sides attempt to put the best face on their candidate's performance. Representatives for Romney had the assembled media pretty much to themselves for the first ten minutes post-debate.

At the time, Axelrod was one of at least a half dozen people on a conference call that started as the first presidential debate ended Thursday night, according to an administration official. Axelrod, along with White House senior adviser David Plouffe, campaign manager Jim Messina, White House communications director Dan Pfeiffer, deputy campaign manager Stephanie Cutter and former White House communications director Anita Dunn participated in the call, which may have contributed to the Democrats' delay.