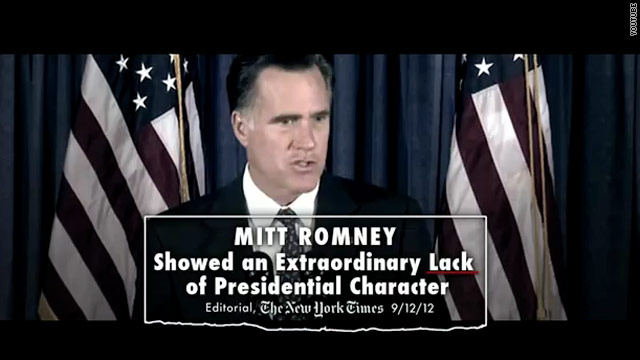 (CNN) - As Mitt Romney delivers a foreign policy address Monday in Virginia, he'll be met with a new television ad by his opponent's re-election campaign that highlights the GOP nominee as "reckless" and "amateurish" on international affairs.

President Barack Obama's team released a new commercial that they say will run on Virginia airwaves, which criticizes Romney over his recent forays into foreign policy, including his foreign trip and comments on the Libya consulate attack.

The 30-second spot features critical news clips of what the commercial calls Romney's "gaffe-filled" trip to England, Israel and Poland. During his tour, the Republican was accused of insulting Palestinian culture and criticizing London's handling of the Olympic Games.

Romney also faced negative headlines over his quick response to the consulate attack in Benghazi, Libya that killed the U.S. ambassador and three other Americans. Soon after word broke of the violence, the GOP nominee fired off a statement blasting the Obama administration, a reaction many labeled too critical and too soon.

"The New York Times said Romney's knee-jerk response 'showed an extraordinary lack of presidential character.' And even Republican experts said Romney's remarks were 'the worst possible reaction to what happened'," the narrator says referring to a quote by in Time Magazine by Anthony Cordesman, a former foreign policy adviser to Sen. John McCain.

Romney, however, has since stood by his statement, while the administration has also been under fire during its investigation of the situation.

In his remarks at the Virginia Military Institute in Lexington Monday, Romney is expected to continue to hit Obama over the Libya attack, building onto criticism of the administration for changing its tune on the cause of the attack.

He will say, according to excerpts of his prepared remarks, the violence "was likely the work of the same forces that attacked our homeland on September 11th, 2001," rather than a spontaneous attack spurred by protests over anti-Islam video. In late September, the Director of National Intelligence James Clapper issued a statement saying they had revised its assessment to conclude that the violence in fact was a premeditated attack.

The new Obama ad, which comes two weeks before the candidates face off in a debate over foreign policy, blasts Romney as being unprepared to manage such high-stakes issues.

"If this is how he handles the world now," the narrator says, "Just think what Mitt Romney might do as president."

Responding to the ad, a Romney campaign spokeswoman said Obama was the one who had "weakened" the United States' standing in the world.

"In every region of the world-and particularly in the Middle East-American influence has been weakened by President Obama's failed foreign policy. American security and the cause of freedom cannot afford four more years like the last four years, and Mitt Romney will restore the bi-partisan tradition of American leadership abroad that President Obama has not lived up to. Mitt Romney understands that a strong America is vital to ensuring peace and prosperity for our nation and our friends and allies," Amanda Henneberg said in a statement.