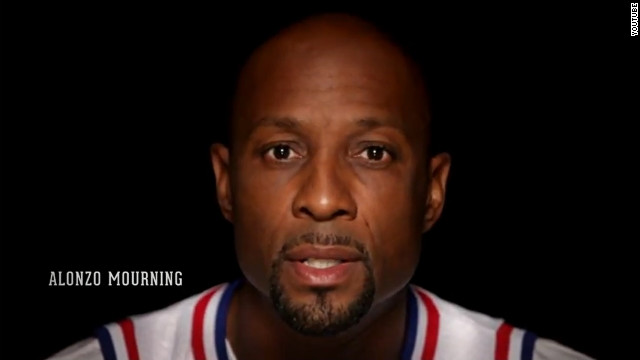 Washington (CNN) – President Barack Obama's campaign is tapping into some athletic star power in three new web videos meant to encourage sports fans to register to vote for the president.

In the latest video, titled "The Greatest" and posted Monday, basketball legends speak directly to the camera against a black backdrop and talk about the definition of "greatness."

"It means keeping your eye on the ball and never losing sight of what's most important," says seven-time NBA all-star Alonso Mourning. "I believe America is still the greatest country in the world, and I am voting for President Obama."

"Because he knows this country succeeds when everyone gets a fair shot," Hampton says.

"Because he will keep this country the greatest," Carter says.

The video ends with the athletes encouraging viewers to register to vote by going to the registration site sponsored by the Obama campaign, GottaVote.com.

"For the president, for the future, be great, vote Obama," says NBA all-star and 2012 NBA Champion Howard.

"If you pass on the word to everyone you know, and they pass it on to everyone they know, Team Obama's going to be unstoppable," says two-time Pro-Bowl defensive back Bethea.

And in a third video released on Sunday, Victor Cruz, a half-Latino wide receiver for the New York Giants, delivers a more direct message to Latino voters.

"It's been a long time since we've actually had a voice like this and had someone that really cares about the Latin community and we need to go out there and let our voices be heard," Cruz says, before encouraging viewers to go to a website specifically for Latino supporters.

Some of these well-known sports figures have also been hitting the campaign trail for the president. The Obama campaign confirmed that Alonzo Mourning and Boston Celtics coach Doc Rivers have done radio interviews on the president's behalf and Mourning has done events for the campaign as well.