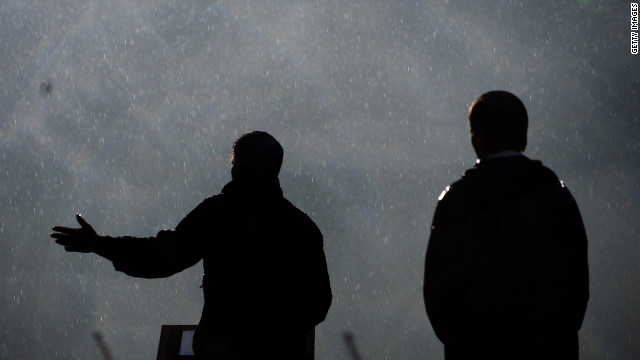 Newport News, Virginia (CNN) - Mitt Romney rolled out a new response to last week’s jobs numbers during a rain-soaked rally in Newport News Monday, where he took heart from a group of several hundred hardy - and sodden - supporters.

After the release of Friday's government report showing unemployment had dipped to 7.8%, its lowest rate in years, Romney dropped a regular line attacking President Barack Obama for presiding over 43 months in office with a rate higher than 8%.

"We've seen the slowest recovery from a recession in history," he told the audience. "As a matter of fact, I just read that if you look back 60 years, and you look at all the months we had with unemployment about 8% before President Obama, there were 39 months in all 60 years with unemployment above 8%."

During his campaign stops in a state where unemployment is far lower than the national average at 5.9%, Romney repeatedly lauded the "conservative leadership" of Virginia Gov. Bob McDonnell. McDonnell campaigned with Romney Monday.

With his collar pulled up against the driving rain, Romney told the audience members swathed in ponchos they gave him confidence.

"People wonder why it is I'm so confident we're going to win," he said. "I'm confident because I see you here on a day like this. This is unbelievable!"

Earlier in the day, Romney saw something else that encouraged him: a group of elementary schoolers who waved to his motorcade as it passed their school.

The campaign said Romney immediately declared he wanted to go back and greet the children, so his motorcade made a u-turn. The GOP presidential nominee then greeted a line of Fairfield Elementary children who waited outdoors to shake his hand.

"Thanks for waving at me as I came by. I decided to come by and say hi to you guys," he told them before posing for a group picture.