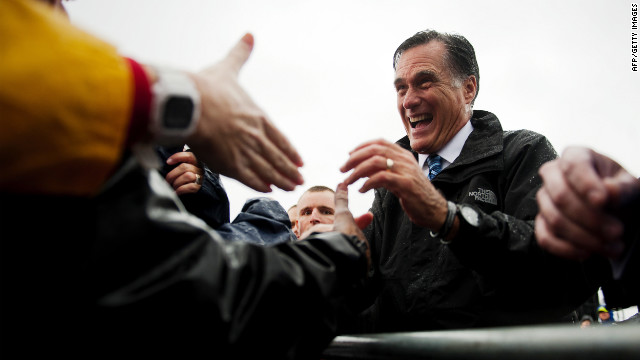 28 days to go: After weeks of struggles, a horse race for Mitt Romney

Editor's Note: This is the first in an occasional series, "The Home Stretch," counting down to Election Day with Mitt Romney.

Newport News, Virginia (CNN) - With 28 days to go, conventional wisdom is all wet. After a day of dodging buckets of rain at events across Virginia, Mitt Romney may have turned the corner in what's fast becoming a remarkable horse race to the finish with President Barack Obama.

The Romney campaign received word that a new national poll indicated he had pulled ahead of the president just before a rally Monday under a torrential downpour in Newport News.

"People wonder why it is I'm so confident we're going to win. I'm confident because I see you here on a day like this. This is unbelievable," Romney told a drenched and understandably small crowd of supporters. Soaking wet, the GOP nominee was all smiles.

Just about an hour after Romney personally delivered McDonald's Quarter Pounders to members of the media riding in the back of his campaign charter Monday, his top advisers were handed the super-sized poll numbers from the Pew Research Center.

The survey of likely voters conducted between October 4 and October 7 showed Romney taking a 4 percentage edge over Obama – a clear sign of the bounce he received from his strong debate performance last week.

After weeks of setbacks for the campaign, ranging from Romney's controversial reaction to the diplomatic attacks in Libya to the hidden camera video of his regrettable remarks at a May fundraiser, the Republican contender believes the first debate has given him a fresh chance to break through with voters.

Campaign officials are "encouraged by the enthusiasm we are seeing from supporters who are energized, as well as undecided voters who are now giving the governor a new look," a senior Romney adviser said.

Reporters traveling with the candidate witnessed this effort firsthand as Romney's motorcade made a U-turn for an impromptu visit with schoolchildren standing alongside the route to the airport in Virginia's Shenandoah Valley on Monday.

By the time Romney and his campaign staff arrived at the school, the students had already returned to their classrooms. Minutes later, however, a Romney aide was leading the children back outside to shake hands with the GOP nominee and Virginia Gov. Bob McDonnell.

"Are you Mitt Romney?" one student asked. "I am Mitt Romney," he answered.

The surprise visit came after Romney's foreign policy address to a group of supporters and cadets at the Virginia Military Institute. In the home stretch of Romney's long run for the White House, the campaign discovered that pictures can matter almost as much as policies.