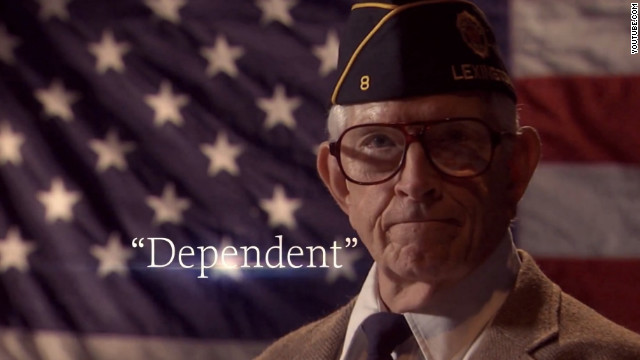 The ad is the third to be released by the Obama campaign on Tuesday.

While one of the spots is sarcastic and focuses on Big Bird, earlier in the afternoon, Obama's campaign also released a spot criticizing Romney's past handling of and future plans for Medicaid, a federal health care program for low-income individuals.

The new spot is on Medicare - the federal health care program primarily for seniors - shows pictures of senior citizens and a veteran as the narrator says, "Victims, dependent.

"That's what Mitt Romney called 47% of Americans, including people on Medicare," the narrator continues.

Last Friday, Romney said the comments were "completely wrong" after standing by them for several weeks. Video of his comments was secretly recorded at a May fundraiser and made public in mid-September on the website of a left-leaning magazine.

The ad says Romney would "replace guaranteed benefits with a voucher system" and that seniors would pay more. On screen is a series of images of seniors.

"You're no victim," the narrator says. "You earned your benefits."

At last Wednesday's presidential debate, Romney was clear that he was not "proposing any changes for any current retirees or near retirees, either to Social Security or Medicare."

"And with regards to young people coming along, I've got proposals to make sure Medicare and Social Security are there for them without any question," he continued.

In a statement responding to he ad, Romney campaign spokeswoman Amanda Henneberg said, “President Obama has not done anything to reform Medicare for the long haul and prevent it from going bankrupt. Mitt Romney has a plan to protect Medicare for today’s seniors and preserve and strengthen it for future retirees.”

Obama's campaign said the spot would run in Florida, Ohio, and Virginia, but did not say how much it was spending on the ad.

- CNN's Gregory Wallace and Ashley Killough contributed to this report