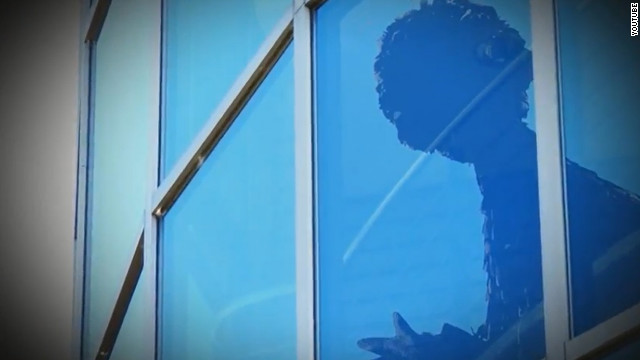 The spot, released Tuesday, sarcastically casts Big Bird as a corporate fiend akin to Bernie Madoff and Kenneth Lay. The campaign said it would air on national broadcast and cable.

“Criminals. Gluttons of greed,” a narrator in the spot says of the notorious white collar criminals. “And the evil genius who towered over them?”

A silhouette of the famous yellow bird appears in a window, before the ad cuts to clips of Romney saying “Big bird” on the stump.

“One man has the guts to say his name,” the narrator says. “Big. Yellow. A menace to our economy. Mitt Romney knows it’s not Wall Street you have to worry about, it’s Sesame Street. Mitt Romney. Taking on our enemies, no matter where they nest.”

At last week’s debate, Romney said he would cut the federal subsidy to the Public Broadcasting Service, which airs Sesame Street, in order to help reduce the country’s deficit.

“I like PBS, I love Big Bird,” Romney said, before adding: “I'm not going to keep on spending money on things to borrow money from China to pay for.”

Members of the president's team said Romney's statements during the debate about defunding PBS and Big Bird left an opening on which the president and his campaign could seize.

Obama himself pounced on the remark, not at the debate but the day after, when he took a tone similar to his latest ad at a campaign stop in Colorado.

"Thank goodness somebody is finally getting tough on Big Bird. It's about time," Obama said. "We didn't know that Big Bird was driving the federal deficit, but that's what we heard last night. How about that?"

Online and on social media, Obama’s team has been actively pushing the Big Bird criticism of Romney, including the correlation between Sesame Street and tighter regulations on Wall Street they claim Romney opposes.

Obama’s team has also deployed a person dressed in a yellow bird costume to Romney’s campaign events in order to drive home their message.

Responding to Tuesday's ad, Romney spokeswoman Amanda Henneberg said it made the "choice in this election" even more clear.

"Four years ago, President Obama said that if you don’t have a record to run on, ‘you make a big election about small things.’ With 23 million people struggling for work, incomes falling, and gas prices soaring, Americans deserve more from their president," she wrote.