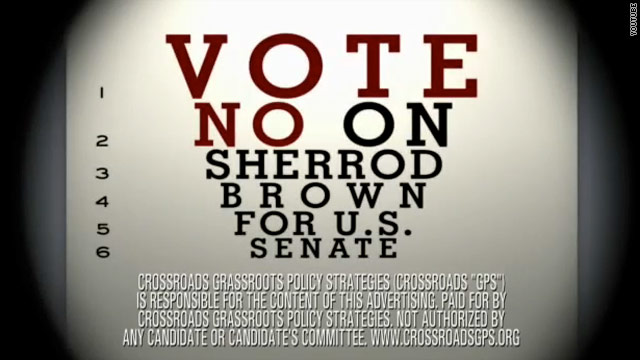 Crossroads GOP spent $4 million on the ads, set to run in Montana, North Dakota, Ohio, Virginia and Wisconsin through Monday.

In Montana, an ad hits first-term Democratic Sen. Jon Tester for introducing legislation in 2011 that proposed delaying regulations to limit bank fees on businesses. The commercial argues Tester benefited from big bank donations to his campaign.

"Tester got big contributions," the ad's narrator says. "And under his plan, you'd get swiped."

Tester is defending his seat against Republican Rep. Denny Rehberg. The state's sole congressman has a narrow three point edge over Tester, according to a recent Maxon-Dixon poll released in late September.

In the latest round of ads, the group also went after Democratic incumbent Sen. Sherrod Brown, who's fighting back a challenge from GOP state treasurer Josh Mandel.

In the optometry-themed spot, the narrator blasts the Democratic senator for supporting Obama's American Jobs Act last year, a bill that failed to pass the Senate in 2011.

"Sen. Sherrod Brown's vision for Ohio jobs is out of focus," the narrator says.

An NBC/Wall Street Journal/Marist poll released in the first week of October showed Brown with a nine-point advantage over his Republican opponent, though Mandel's team points to more recent–yet right-leaning–polls that show a narrower margin between the candidates.

Meanwhile in Virginia, Crossroads hit Tim Kaine, former governor and former Democratic National Committee chair, in the ad for supporting a 2011 bill that ultimately resulted in the impending defense cuts.

Unless members of Congress reach a budget deal by the end of the year, automatic cuts will be triggered across the board, including massive cuts to the military. Virginia, with several military bases, could see a large portion of those spending decreases.

His campaign responded to the ad in a statement Tuesday.

"What 'got us here' was six years of runaway spending by George Allen and his Congressional allies that turned a huge surplus into a massive deficit," campaign spokeswoman Brandi Hoffine said, referring to Kaine's opponent, also a former governor and a former U.S. senator.

The race has been in a dead heat for more than a year. An NBC/Wall Street Journal/Marist poll released last week showed Kaine with a five point advantage over Allen, a margin that falls within the sampling error.

"Tammy's extreme takeover of health care is too extreme for Wisconsin," the ad's female narrator says.

Baldwin is running against former Wisconsin Gov. Tommy Thompson, who captured the GOP nomination in a crowded primary last month.