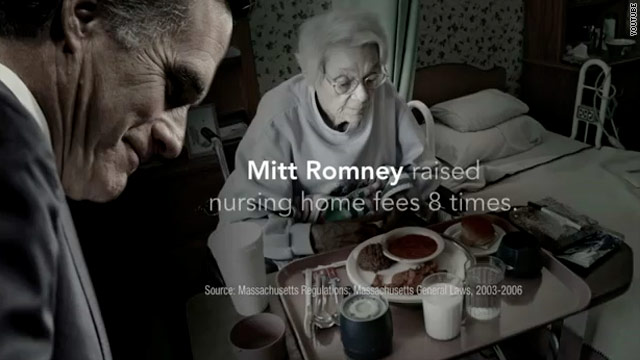 The 30-second commercial, "Only Choice," attacks Romney's plan to block-grant Medicaid and allow states to manage the system, rather than the federal government.

Juxtaposed against a series of images of seniors in nursing homes, the ad's narrator points to fees on nursing home beds that Romney enacted as Massachusetts governor. The fees were part of a host of fees, as well as closed loopholes, the then-governor implemented in order to close the state's budget deficit.

The ad, however, seizes on the fact that a large portion of Medicaid goes to nursing homes.

"It's one of the hardest decisions a family can make: realizing a nursing home is the only choice," the narrators says. "For many middle class families, Medicaid is the only way to afford the care."

The narrator adds that Romney's Medicaid proposals would cut the program by a third and burden "families with the cost of nursing home care."

"We have a president who won't let that happen," the ad says.

Romney's team, however, has argued in the past that his budget plan would not make cuts to Medicaid but would slow the growth of the system instead.

Responding to the ad Tuesday, a spokeswoman for the campaign stood by the candidate's plan for Medicaid, arguing that it allows for more "flexibility."

"By giving states greater flexibility and the incentive to provide coverage more efficiently, Governor Romney will ensure that low-income Americans receive the care they need while also bringing federal spending back under control," Amanda Henneberg said in a statement.