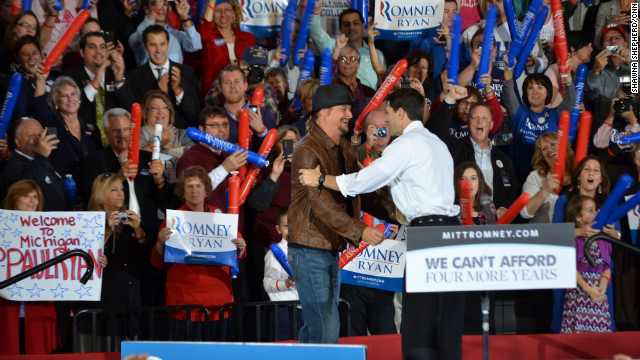 In Michigan Monday evening, Ryan pivoted from Friday’s government report, which showed unemployment had dipped to its lowest rate in years to 7.8%, to sluggish job growth.

“(President Barack Obama) said that the economy would be growing at 4% this year. Well now it’s growing at 1.3%. The economy is growing slower this year than it grew last year and last year it was slower than the year before. We created – we had less job growth last month than we had the month before and the month before that,” Ryan said at a rally before nearly 6,000 people at Oakland University.

While the Republican presidential nominee Mitt Romney rolled out a new response to the latest jobs report earlier in the day in Newport News, his running mate continued with the campaign’s primary line of attack over their democratic challenger’s handling of the economy.

“The president said if only we borrow about $831 billion and spend it on all his friends and cronies and special interests in Washington it would create all these jobs, that unemployment would never even get to 8%. Well it was above it for 43 months,” he said.

Before Kid Rock introduced Ryan as a “fellow hunter, a fellow fan of rock and roll and a great Midwesterner,” the Michigan-native said he wasn’t going to preach politics like some friends in Hollywood.

“It is a little difficult to put myself in this position knowing it may alienate a few fans, but you know what I really believe strongly that it’s okay to disagree on politics and the direction of our country without hating one another,” he said.

The musician, whose real name is Robert James “Bob” Ritchie, encouraged the audience to vote and expressed frustration over Obama’s job performance.

“I also want to be real clear that I am very proud to say that we had elected our first black president. I’m sorry, I’m sorry he didn’t do a better job. I really wish he would have—I do.”

Kid Rock continued, “But the facts are the facts and we just saw them come to light in the last debate with no outside BS, no bias media involved, no interruptions and negative politics ads every five seconds and most importantly no damn teleprompters. Yeah I enjoyed it so much I think I might throw a keg party for the Ryan-Biden debate.”

The vice presidential hopeful and the singer of the popular campaign song “Born Free” a few weeks ago at a fundraiser in the performer’s home state on August 24.

Ryan used Midwestern connections to appeal to middle-aged Michigan voters who are struggling under the Obama administration.

“A lot of the guys I grew up with in Janesville, a lot of friends of mine from high school, they lost their jobs at the GM plant,” said Ryan. “Problem is, with a lot of these jobs gone, with a lot of people in their 30s and their 40s and their 50s and their 60s losing this livelihood, there aren't many alternatives out there. We need to make sure that people who are caught in between, who are slipping through the cracks, get the skills they need to get the careers they want so they can get back on their feet and get back on the path to prosperity, get back in the middle class, have higher take-home pay, go back to work.”