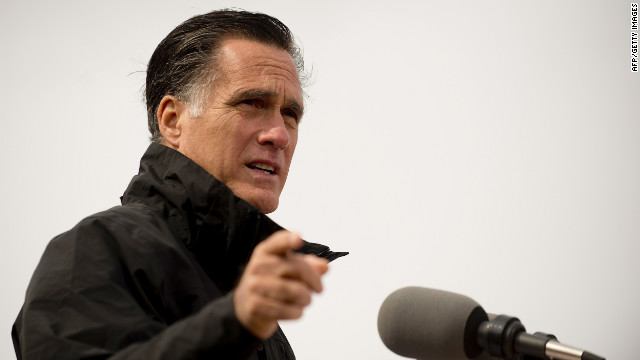 Van Meter, Iowa (CNN) – For the first time in days, Mitt Romney did not invoke last week's presidential debate during his remarks at an Iowa campaign stop.

But it was clear he was continuing to sharpen his criticisms of his opponent, Barack Obama.

Standing in a dusty wind that coated supporters' hair and clothing, Romney immediately attacked the president for what he called Obama's misguided focus on a straw man – or a large feathered bird, in this case – instead of talking about the economic struggles plaguing Americans.

"These are tough times with real serious issues, so you have to scratch your head when the president spends the last week talking about saving Big Bird," Romney said, to the crowd's delight. "I actually think we need to have a president who talks about saving the American people and saving good jobs and saving our future."

Democrats have seized on Romney's promise during Wednesday's debate to cut federal funding to PBS, and have even deployed a series of Big Bird look-alikes to Romney events all week.

On Tuesday the activist dressed as Big Bird stood off a highway half a mile away from the Iowa farm where Romney focused largely on regional issues.

Romney accused Obama of not promoting agricultural trade and failing to lead Congress to agreement on a farm bill last month.

"That's something I will devote my time to, to make sure that we get that bill passed so farmers know what they can expect," he said. "There are big differences between the president and me. He has no plan for rural America, no plan for agriculture, no plan for getting people back to work. And I do."

Although Romney did not specifically discuss his widely-praised debate appearance, his son, Josh, offered a stinging critique of Obama's performance in the match-up.

He jokingly said the Romney sons took credit for their father's success in the debate, explaining that when they were younger, the boys taught their father "how to debate an obstinate child."

"We were the ones, as kids, that kept saying the same thing over and over, and we'd say the same lie over and over, and my dad learned then not to believe it," Josh Romney said. "So, while we didn't go to any of the formal debate preparation, we did the real hard stuff."

"If anyone should be scratching their heads, it's the American people when Mitt Romney says that he'll reduce the deficit and pay for $5 trillion in tax cuts for the wealthiest Americans by getting rid of PBS and Big Bird, which make up 1/10,000th of the federal budget. That's not a serious deficit reduction plan- it's a joke," Smith said.