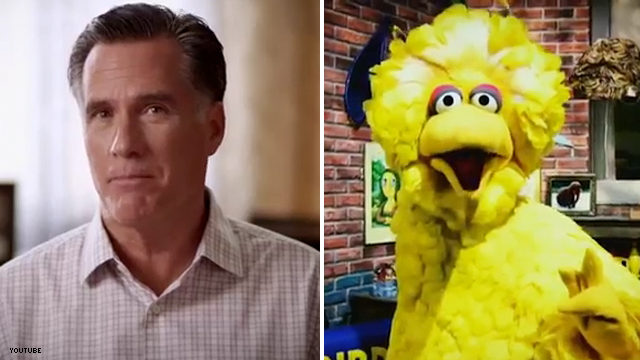 It doesn't take a campaign report from Kermit the Frog to figure out Mitt Romney woke up to the equivalent of an Oscar the Grouch style ad from the Obama campaign this morning.

Mocking the GOP nominee for threatening to take the axe to federal funding for public broadcasting at last week's presidential debate, the spot's narrator intones breathlessly: "Mitt Romney knows it's not Wall Street you have to worry about, it's Sesame Street."

En route to a stop in Iowa where Romney was to detail his plan for American farmers, senior campaign adviser Kevin Madden was of course asked about poultry, of the large and yellow kind.

"The governor is going to focus acutely on jobs and the economy and what he can do to create a better, more prosperous future for the American people," he added.

Still, Romney has yet to be pressed on how eliminating funding for PBS would have much of an effect on the deficit.

"You would need to cut PBS more than 1,000 times to fill the hole in Romney's debate promises," an Obama campaign email pointed out, announcing its new spot.

Both the Republican National Committee and the Romney campaign blasted out emails to reporters, with a reminder of what then Senator Obama said during his speech to the Democratic convention in 2008.