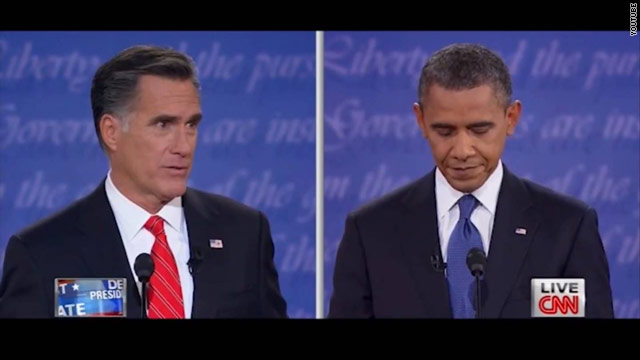 Using footage from Denver's presidential debate, the ads capitalize on Romney's strong showing at the candidates' first faceoff using clips spliced together of the GOP candidate touting his plan to create jobs.

According to a CNN/ORC International survey conducted right after the debate, 67% of debate watchers questioned said that the Republican nominee won the contest, with one in four saying that President Barack Obama was victorious. Polls released this week continued to indicate Romney received a post-debate bounce from his lauded performance.

"Look at the evidence of the last four years… We've got 23 million people out of work or stopped looking for work...," said Romney in clips from Denver's debate in one of the ads. "I'm not going to raise taxes on anyone... My plan is to bring down rates … to get more people working.”

The 30-second spots continue using clips of Romney from the first debate discussing his plan to reduce taxes while hammering the president for what the Republican campaign bills as job plan that would raise taxes on middle-income Americans.

"They're suffering in this country," Romney says while text reads "Under President Obama: $4,000 Tax Hike On Middle-Class Families," pointing to a study by the American Enterprise Institute.

An Obama campaign ad released October 6 following the debate pushes back on the study's findings, questioning the organization's political leanings.

"The chairman of that so-called independent group is from Romney's former company. Dick Cheney is on its board. Newt Gingrich was there, too," the Obama ad released over the weekend says. "It's not independent – it's just not true."

Obama spokesman Danny Kanner responded to Wednesday's ads saying, "There is nothing Mitt Romney won't say to win votes. In the last few weeks, Romney has said there would be no major tax cuts as part of his $5 trillion tax plan because he'd cut deductions to pay for it."

"But today, his ads suggest the middle class will see a 20 percent tax cut if he were elected. That's despite the fact that independent, non-partisan analysis confirms paying for Romney's massive tax cuts for the wealthiest Americans would require him to raise middle class taxes by cutting important deductions like the mortgage interest deduction," said Kanner.