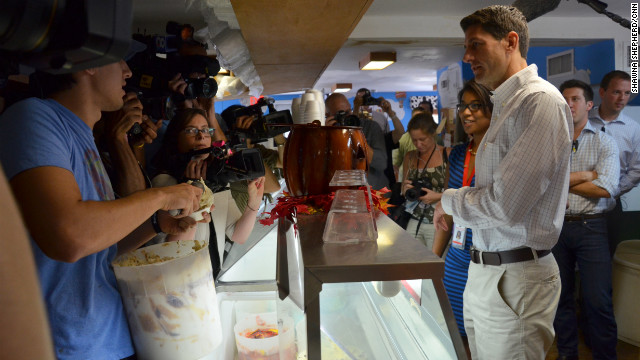 St. Petersburg, Florida (CNN) – During an ice cream stop Wednesday, Paul Ryan acknowledged Joe Biden's debate experience might give him an edge during their upcoming face off but Mitt Romney's running mate said his challenger has one big weakness: Barack Obama's record.

"Joe Biden has been on this stage many times, this is my first time so sure it is a nervous situation because Joe Biden is one of the most experienced debaters we've had in modern politics. But the Achilles heel he has is President Obama's record and I am really looking forward to giving the American people a very clear choice," Ryan said.

A confident Ryan talked to reporters Wednesday when he stopped for double scoops of "Moose Tracks" ice cream at Old Farmer's Creamery in St. Petersburg, after he spent two days prepping for the only vice presidential debate that will take place in Danville, Kentucky Thursday.

In Florida, at a landmark Mediterranean Revival resort hotel overlooking Tampa Bay, Ryan hunkered down with aides and former Solicitor General Ted Olson, who played the part of Biden in mock debates.

While an aide said he spent most of his time practicing in a basement hotel ballroom, Mitt Romney's running mate said he also "finally got some sun."

"In this life, I haven't gotten a chance to spend much time outdoors…I've done some mountain biking in the last couple of months but I got a chance to just do some reading outside," said Ryan after buying his two scoops in a cup.

After Barack Obama's performance in the first debate, the seven-term Wisconsin lawmaker has said in a number of interviews he expects the Democratic vice president to launch at him "like a cannon ball."

"Because they had such a bad debate, Joe Biden is just going to come flying at us," Ryan said during an interview with Detroit radio station WJR that aired Monday. "It seems pretty clear that their new strategy is just basically to call us liars, to descend down into a mud pit, and hopefully with enough mudslinging back and forth-and distortion-people get demoralized and they can win by default."

Ryan was asked to comment on whether Romney's position on abortion has changed after the presidential nominee said in an interview with The Des Moines Register that he has no abortion-related legislation on his platform that he would reinstate a policy banning nongovernmental organizations from using federal funds to provide abortions.

Ryan defended Romney. He said, "Our positions unified. Our position is consistent and hasn't changed."

During the ice cream stop Ryan dismissed a question that Romney was unaware how many times his running mate has debated during his congressional career.

"Well I'm sure he probably didn't watch my debates," he said.

Ryan has been preparing for Thursday's showdown since he joined the Republican ticket on August 11, but after his speech at the Republican National Convention, the vice presidential hopeful intensified efforts with an all-day prep session at an undisclosed location near Bend, Oregon on Sept. 9.

The following week, Ryan teamed up with Olson at a hotel in Washington, D.C., which was the first time he tossed around questions and answers with the conservative legal scholar, who argued for George W. Bush in the landmark 2000 Supreme Court case Bush v. Gore.

They met one more time in Washington and again at a hotel near his home in Janesville, Wisconsin on Sept. 23.

The duo did not engage in a full-scale 90-minute mock debate until the first week in October when they convened in Virginia at the Wintergreen Resort tucked in the Blue Ridge Mountains.

This week, Ryan spent all day Tuesday and half the day Wednesday in St. Petersburg focusing on debate prep. He arrives in Danville early Wednesday evening.