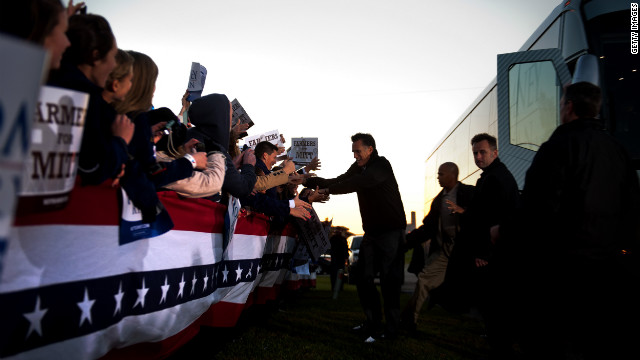 A glimpse into the campaign life of Mitt Romney

That's certainly no surprise as the 2012 race heads into its final stretch, but a copy of Romney's internal campaign schedule obtained by CNN offers a small glimpse into how tightly-managed the Republican's long days on the campaign trail have become.

The private schedule, provided to CNN by a source, outlines Romney's Oct. 10 tour of Ohio with minute-to-minute precision, from his 9 a.m. hotel departure in Akron to his 8:50 p.m. arrival at a Courtyard by Marriott in Dayton.

For an hour-long ride on his campaign bus between campaign events in Mount Vernon in Delaware, the schedule notes that "WMR will eat lunch and participate in calls during this drive."

Between 2:05 p.m. and 2:15 p.m. later that afternoon, staff reserved time for Romney to call his running mate Paul Ryan on the eve of his debate against Vice President Joe Biden.

Usually, these schedules are privy only to Romney advisers and campaign surrogates who join up with the Republican nominee on the road – in Wednesday's case, New Jersey Gov. Chris Christie and Ohio Gov. John Kasich.

But it does offer a window into the grueling routine of a modern-day presidential candidate - and the detailed planning that goes into coordinating a single day on the campaign trail for Romney, his advance team, top allies, state-level aides and a retinue of top advisers.