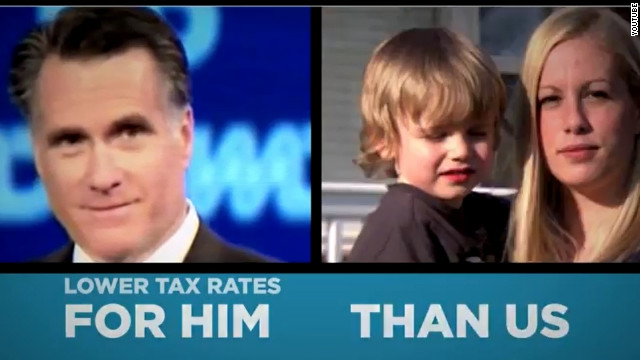 (CNN) – Mitt Romney's personal income taxes are the subject of the latest television spot from President Barack Obama's campaign, which claims in the spot released Friday that Romney's effective tax rate of 14% is unfair for a man worth hundreds of millions of dollars.

The ad uses clips of Romney's interview on "60 Minutes" in September, when he was questioned about his own tax rate revealed when he released his 2011 tax return and information about his previous returns dating back two decades.

The Obama ad splices together two questions asked by CBS anchor Scott Pelley, using Romney's answer to only one of the inquiries.

The spot shows Pelley asking, "You made on your investments personally about $20 million last year and you paid 14% in federal taxes. That's the capital gains rate. Is that fair to the guy who makes $50,000 and paid a higher rate than you did?"

The commercial jumps ahead to Pelley asking another question: "So you think it is fair?"

Romney is shown answering, "Yeah, I think it's the right way to encourage economic growth."

What's not shown is the GOP presidential nominee's answer to Pelley's first question. He responded by acknowledging his rate was low, saying "one of the reasons why the capital gains tax rate is lower is because capital has already been taxed once at the corporate level, as high as 35%."

A Romney campaign spokeswoman characterized the ad as "pathetic and misleading."

The question of Romney's taxes has swirled on the campaign trail for months, first as Democrats pushed the Republican candidate to release more years of returns, and then after the information was released, for paying what they said was an unfairly low rate.

Tax and accounting giant PriceWaterhouse Coopers, which prepared the Romneys' taxes from 1990 through 2009, issued a letter stating the couple paid 100% of the federal and state income taxes owed during those 20 years.

The firm also said their average annual effective federal tax rate was 20.2% for the period. And annually, they never paid an effective rate below 13.66%.

PwC did not detail, however, how much Romney made in income during that period or how much he paid in taxes.