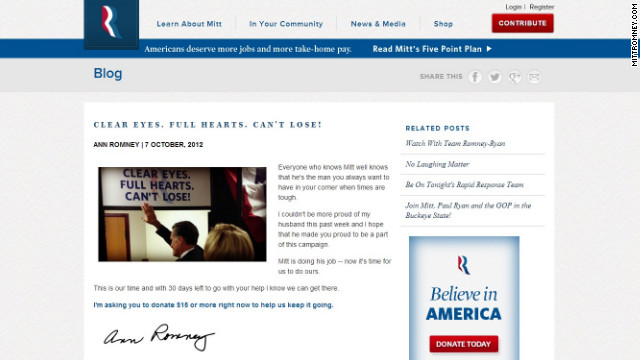 Will Romney punt his slogan?

(CNN) - It may be game over for one of Mitt Romney's favorite slogans.

On the trail recently, the GOP presidential nominee has been quoting a line popularized by the television show "Friday Night Lights." But the show's creator is calling a penalty.

"I was not thrilled when I saw that you have plagiarized this expression to support your campaign," Berg, who came up with the phrase, wrote in the letter, which was obtained by the Hollywood Reporter. "Your politics and campaign are clearly not aligned with the themes we portrayed in our series."

The slogan was used as a motivational line on the show, which centers around a high school football team in Texas. The popular series, which ran from 2006-2011, was based off the movie and book with the same name.

Romney has said the phrase in several stump speeches, and it was used as the subject line for an email sent to supporters. It also appears on the campaign's website in a photo of Romney touching what appears to be a sign in a campaign office with the phrase displayed.

In the letter, Berg said the only "relevant comparison" he can see between Romney and the show is Buddy Garrity, a character who "turned his back on American car manufacturers selling imported cars from Japan," he wrote.

He added Romney's use of the phrase "inappropriately" associates the show with the campaign.

"Please come up with your own campaign slogan," Berg concludes.

The writer of the original book, a 1990 best seller, expressed his support for Romney earlier this week. Buzz Bissinger penned a column for The Daily Beast endorsing the candidate.

While he was on the fence earlier in the race, Bissinger said the "tipping point" was Romney's performance in the first presidential debate.

"Romney finally did what he should have done all along instead of his balky cha cha with the old white men of the conservative Republican wing: he acted as the moderate he is, for the first time running as himself, not against himself, embracing his record as governor of Massachusetts," he wrote.

Romney's campaign did not immediately respond to a request for comment on Berg's letter.