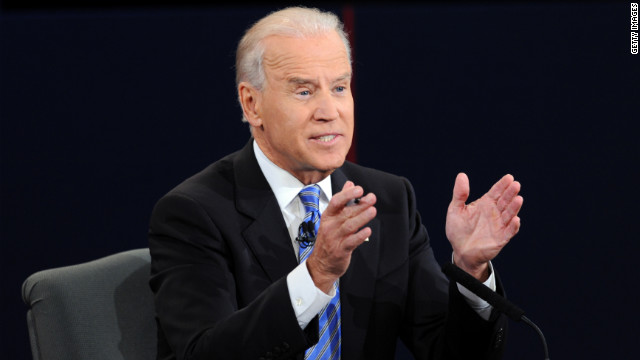 (CNN) - Vice President Joe Biden said Saturday that this presidential election comes down to the two top candidates’ disposition, and on that, there is no comparison.

"Every presidential race always comes down to who the American people think possesses the character and conviction," he said at a fundraiser in Connecticut. "It will not surprise you on that score, I don't even think it's close between President (Barack) Obama and Gov. (Mitt) Romney."

Biden's forthright assessment of the race came two days after he went head-to-head with Republican vice presidential candidate Paul Ryan at a debate. Both candidates cited their personal resolve as an example of what they bring to the office.

"I never say anything I don't mean. Everybody knows, whatever I say, I do," Biden said. "And my whole life has been devoted to leveling the playing field for middle-class people, giving them an even break, treating Main Street and Wall Street the same, hold them to the same responsibility."

Ryan answered that the current administration does not live up to expectations of their word and actions. "What you need are people who, when they say they're going to do something, they go do it. What you need are, when people see problems, they offer solutions to fix those problems."

Both campaigns have described this election in terms of a choice between two very different viewpoints. Biden stood by this, saying the November vote is "important not only for the next four years but for the next 20 years."

"This election - this is not hyperbole - presents the starkest choice in my memory for who is going to lead this country," Biden said. "In every area we have such a fundamentally different vision ... than Gov. Romney and Congressman Ryan."

While the blows exchanged between the sides are metaphorical, Biden's introducer - Rep. Chris Murphy, a Connecticut Democrat - is facing someone who knows something about people who come out swinging. Murphy is facing former wrestling executive Linda McMahon in a race for a U.S. Senate seat out of Connecticut.

"All of our thanks to the vice president for what he did Thursday night," said Murphy, referencing the debate. "I've been hanging around Linda McMahon a little bit ... and I think what Linda McMahon would say (about) what Joe Biden did to Paul Ryan Thursday night is a 'smackdown.' "