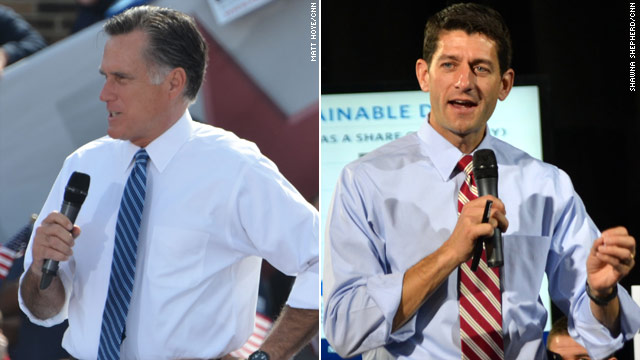 In Ohio, Romney, Ryan cast Obama as soft on China

"Over the past several years, the president's failed to call China a currency manipulator," Romney said at a rally in Portsmouth, Ohio. "He had the occasion on Friday to come out with that official designation. Do you know what they said? We're not going to make any determination until after the election."

"Let me tell you, on day one of my administration I will label China a currency manipulator, we gotta get those jobs back and get trade to be fair," he continued.

The comments from the Republican candidates come a day after the Treasury Department announced it will hold off publishing a twice-yearly report on foreign exchange, due October 15, that often contains criticism of China's currency policies.

"The administration had their eighth chance to label China a currency manipulator," Ryan said at a separate event nearly 300 miles away from Romney, in Youngstown. "That's eight opportunities to say, 'You know what, play fair with us, trade with us fairly.'"

According to the U.S. Treasury, the report will be released after global finance officials from the G-20 leading economies meet in early November.

"We've lost hundreds of thousands of jobs, according to one study, because of just this problem. Two million jobs we've lost, according to the International Trade Commission, because of one country, China, taking our intellectual property rights, meaning taking our patents, taking our goods that we make and copying them and selling them. That's not correct. That's not right. That's cheating," Ryan said in his opening remarks at a town hall meeting in this battleground state.

Ryan misstated data from the U.S. International Trade Commission report. The 2011 report does not assign a number of lost jobs to currency manipulation by China but asserts that the tightening of intellectual property rights could lead to the creation of 2 million jobs in the United States.

The presidential campaigns have accused one another of being weak on China and both candidates have included misleading or disputed information in their television ads on the subject.

Speaking in the hard-hit manufacturing area of Ohio's Mahoning Valley, Ryan emphasized the need to increase manufacturing jobs in order to build a stronger middle class.

Nearly 300 miles southwest of Ryan, Romney said currency manipulation means "that American companies that are making these same products, they go out of business if the Chinese products are so much cheaper than the real costs behind them."

"We are going to stop this kind of cheating from occurring," Ryan said at Youngstown State University. "That's a big deal. That takes our jobs. You have to stand up for the American manufacturing system. Giving good speeches, you know, saying the right thing, that sounds good, but getting it done is what matters."