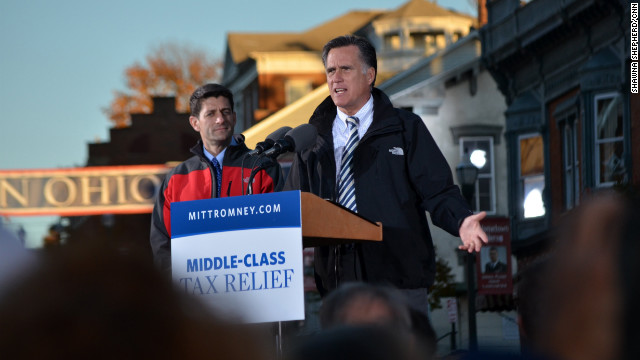 “Gosh, we got to watch this guy debate and there was one person on the stage with thoughtfulness, who was respectful, who was steady and poised. There is one person on that stage you’d want to be with if there were a crisis – it is this man right here,” Romney said at a rally with his running mate that drew an audience of nearly 8,000 to a town square.

The Republican duo, last together one week ago, reunited in Lancaster the day after the vice presidential candidates debated in Danville, Kentucky.

Romney did not call out Biden directly but the GOP presidential nominee criticized the Democrat for not proposing any solutions.

“And when the moderator asked how you’d get the economy going, one person on the stage just attacked. But this guy stood up – well it was sitting down, I guess, but metaphorically he stood up – and he went through all the things he’d do to get this economy going,” he said.

Earlier in the day at a late breakfast with his wife Janna and three kids in Lexington, Kentucky Ryan said he felt “great” about the debate but refused to weigh in on whether he felt knocked around by the Biden.

But Ryan made a point to lambaste the vice president for comments he made about the Benghazi attacks in Libya, which resulted in post-debate questions and monopolized much of Friday’s White House briefing with reporters.

“You know, we had a little chat about Libya and Benghazi,” said Ryan. “We mourn the cost of these four brave Americans, but talking about blaming, first they blame a YouTube video in a nonexistent riot, then when the country is getting upset about it they blame Romney and Ryan for getting people upset about it. They keep changing their story.”

The vice presidential hopeful continued, “This is not what leadership looks like. We need clarity, not confusion. We need accountability, and no more excuses. This tragedy would be troubling in and of itself and tragic in and of itself but unfortunately what we are witnessing when we turn our TVs on a daily basis is the unraveling of the Obama foreign policy.”

Romney also seized on Biden’s statements. It was the second time in as many days that Romney sharply criticized the Obama administration for its posture in the aftermath of the attack.

At an outdoor rally in Richmond, Romney said Biden had raised more questions about the administration's handling of the deadly incident when he "directly contradicted the testimony of State Department officials," during the vice presidential debate Thursday night.

Back in battleground state Ohio, where Romney and Ryan will spend their Saturday at separate events, the presidential nominee tried to capture the momentum he feels is building ahead of the second presidential debate on Tuesday in New York.

“I've had the fun of going back and forth across Ohio and this week I was also in Florida and Iowa, I was in North Carolina, in Virginia and you know what there is a growing crescendo of enthusiasm people recognize that this is not an ordinary campaign this is a critical time for the country,” Romney said. “There is more energy and passion, people are getting behind this campaign. We're taking back this country!"