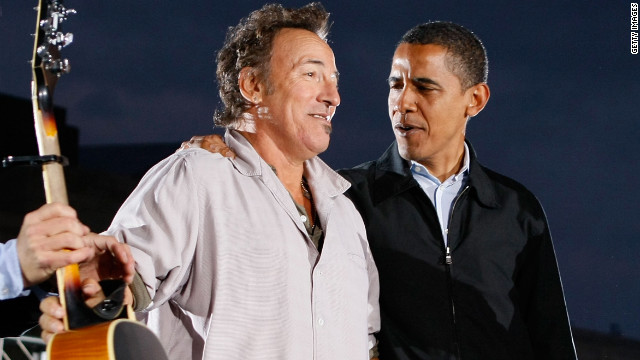 Springsteen to rock the campaign trail

(CNN) - Two very high profile surrogates will be campaigning for President Barack Obama in the crucial battleground states of Ohio and Iowa next week.

The Obama campaign announced Saturday morning that former President Bill Clinton and rock star Bruce Springsteen will team up in Parma, Ohio on Thursday to stump for the president.

Later on Thursday, Springsteen will appear in Ames, Iowa, the campaign said.

Clinton, meanwhile, will continue on to an event in Steubenville, Ohio.

"Bruce Springsteen's values echo what the President and Vice President stand for: hard work, fairness, integrity," Obama campaign manager Jim Messina said in a statement. "His appearances will help with our get out the vote effort in these critical swing states and we are thrilled with his ongoing support."

Springsteen appeared, and performed, at rallies in 2004 for Sen. John Kerry of Massachusetts, that year's Democratic presidential nominee, and in 2008 for Obama. But he had said as late last month that he wouldn't be performing in the 2012 election.

The appearance of the former president is no surprise though. He's been a very high profile surrogate for Obama this year.

Both campaigns have been spending a lot of time and money battling for Ohio's 18 electoral votes.

A new CNN Poll of Polls that averages the three non-partisan, live operator surveys in Ohio conducted entirely after the first presidential debate indicates a very close contest, with Obama at 50% among likely voters and Romney at 47%.

Iowa has six electoral votes and went for Obama in 2008 and Bush in 2004. Polling conducted before the first presidential debate showed a close race there with a slight advantage for Obama.