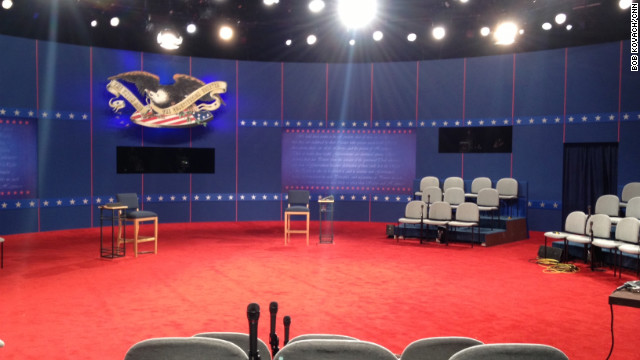 The closeness of the numbers accentuates just how much is on the line when Obama and Romney faceoff Tuesday night at a town hall style debate.

"The new polls show the race has snapped back to the fundamentals. The margin of comfort Obama enjoyed in September is gone; it was based on voters who were dissatisfied with his performance but didn't see Romney as a viable alternative," says CNN Senior Political Analyst and National Journal Editorial Director Ron Brownstein. "Clearly at the first debate, Romney crossed that threshold for many of those voters. Which means we are back in a race that is structurally close, and linked tightly toward Obama's performance."

But the presidential election is not a national popular vote contest. Instead it's a race for the states and their electoral votes. And a new CNN Poll of Polls in the crucial swing state of Virginia, where 13 electoral votes are up for grabs, indicates it's all knotted up, with Obama at 48% and Romney at 47% among likely voters. The three surveys used to make the average are NBC/WSJ/Marist (Oct. 7-9); Quinnipiac University/CBS News/New York Times (Oct. 4-9); and American Research Group (Oct. 12-14).

And CNN Poll of Polls compiled and released over the weekend in two of the biggest battlegrounds, Ohio (where 18 electoral votes are up for grabs) and Florida (where 29 are at stake) also indicate close contests.

Going beyond the top-line numbers, the new ABC News/Washington Post and Politico/George Washington University national surveys indicate a rise in the former Massachusetts governor's favorable ratings, most likely as a result of perceptions of what was generally regarded as Romney's strong performance in the debate in Denver on October 3. The Politico/George Washington poll indicates the president's once large advantage on favorability has disappeared.

The numbers suggest the president has a large to-do list Tuesday night when he shares the stage again with Romney.

"As you see in these polls, the president's job approval rating remains right around 50 percent-which means we are likely heading for a very close finish. It also means that among the many challenges facing Obama in the next debate, the first among equals is convincing wavering voters that he has a plan to make the next four years better than the last four –something he almost utterly failed to convey at the first debate, and which has allowed Romney to be heard "as the voice of change," as Stan Greenberg and James Carville put it in a Democracy Corps memo released this morning," adds Brownstein.