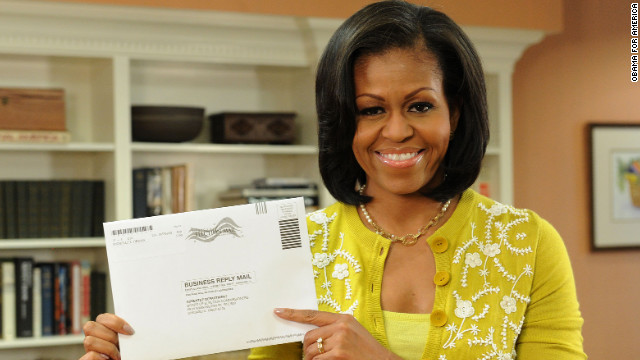 A photo of the first lady holding the envelope containing her ballot at the White House was released on the official Barack Obama Flickr account.

In a press release, Obama's campaign also noted the president would vote early in Chicago on October 25.

"In states around the country, voters can already vote early in person or by mail," Michelle Obama said in a statement. "It means you don't have to worry about your schedule filling up, or getting sick, or having to work late on Election Day. And more than anything, it means you can act right now to move our country forward."

Depending on state law, early voting can either be done in-person, through the mail or through an absentee ballot. Some states require an excuse for absentee voting while others are moving toward no-excuse absentee balloting. Military personnel are able to vote by email.

Both Democrats and Republicans are making a push to get supporters to vote early, hoping to lock in backers well ahead of Election Day.