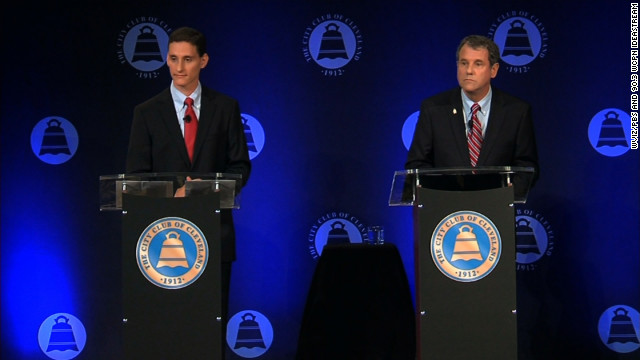 (CNN) - Sen. Sherrod Brown of Ohio and the Republican seeking to unseat him, State Treasurer Josh Mandel, debated on Monday in Cleveland, sparring over whether the auto bailout and other stimulus measures had helped the Ohio economy.

Mandel said that if elected he would "take a backseat to no one when it comes to fighting for auto jobs, to protect auto jobs, and to grow auto jobs here in the state of Ohio" but said he did not favor the measures.

"I could not have supported a process that stripped pensions from middle class retirees, and stripped jobs from mechanics and salesmen throughout the state of Ohio," Mandel said. "I will do everything I can in Washington to grow the economy through strong manufacturing policy strong auto manufacturing policy, but I'm not a bailout senator. He's the bailout senator who bailed out Wall Street, Fannie, and Freddie, and large corporations."

Brown, a first-term Democrat, said that Mandel's opposition to the measures "just boggles my mind."

"Josh, do you know about the Chevy Cruze and the Chevy Eco? The steel and the aluminum are made right here in Cleveland. The transmission comes out of Toledo. In Defiance they build the engines. These are real jobs and real people that's a big part of the reason that before the auto rescue, well in early 2010, the unemployment in this state was over 10.5%, now it's under 7%," Brown said. "It's not good enough, there are far too many people still unemployed, but we're going in the right [direction]."

But the state's unemployment rate is at 7.2%, according to the government's August statistics, and was last below 7% in August 2008. September state-level numbers come out later this month.

Over $21 million has been spent on the Buckeye State race for the U.S. Senate, according to Federal Election Commission data. Both the Rothenberg and Cook political reports rate the Senate race as leaning in Brown's favor.

The state is a key battleground in the presidential race.