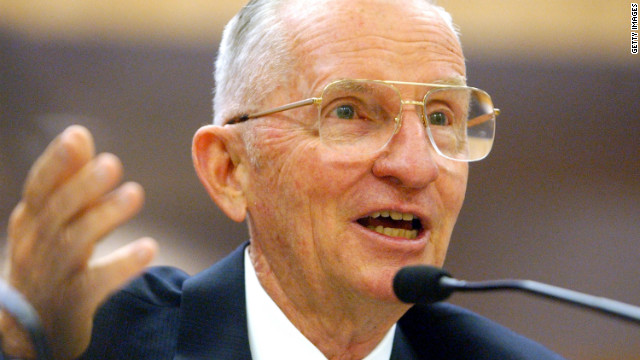 (CNN) – Former presidential candidate Ross Perot came out in favor of Mitt Romney Tuesday, writing in a newspaper editorial the 2012 GOP nominee was in a better position to slash America's ballooning federal debt.

Perot, who ran as an independent candidate in 1992 and 1996, wrote in the Des Moines Register President Barack Obama hadn't done enough to fix a stalled economy.

"Our country faces a momentous choice," Perot wrote. "The fact is the United States is on an unsustainable course. At stake is nothing less than our position in the world, our standard of living at home and our constitutional freedoms."

Perot, a Texas businessman and billionaire, ran as an independent candidate in 1992. He dropped out of the race in July but re-entered in October, going on to nab 19% of the vote. He ran again in 1996 and won 8% of ballots cast. He backed George W. Bush in 2000, but stayed out of the presidential race in 2004. In the 2008 GOP primary, he endorsed Romney over then-rival Sen. John McCain.

In his endorsement Tuesday, Perot hit Obama for adding to the national debt as well as presiding over cuts to the military.

"At a moment when turbulence is sweeping critical regions of the world, we are increasingly unprepared," Perot wrote. "That is wrong. It's not the way America ought to be. It is for these reasons that I am endorsing Mitt Romney."

The former candidate went on to cite Romney's balancing the state budget while governor of Massachusetts, despite a legislature run by Democrats.

"In short, although he is a rock-solid conservative, he knows how to reach across the aisle and make common cause with those with whom he disagrees," Perot wrote.

In a statement, Romney wrote he was "proud" to land Perot's endorsement.

"Ross Perot's accomplishments as an entrepreneur, as a political leader, and as a naval officer make him a living legend," Romney wrote. "He understands the challenges facing the nation and what it will take to meet them."