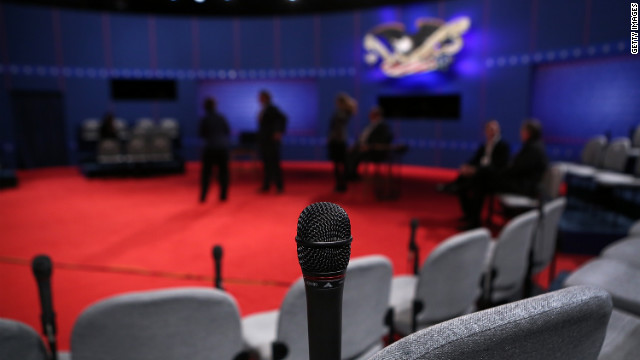 BY THE FLIP OF A COIN: ROMNEY WILL GO FIRST: Mitt Romney will get the first question at Tuesday's second presidential debate. Pre-game begins at 7 p.m. ET on CNN; the debate begins at 9 p.m. CNN Chief Political Correspondent Candy Crowley will moderate the town-hall-style debate.

TRAIL TRIVIA
(Answer below)
In the 2000 town-hall debate, Al Gore famously stood and got close to George W. Bush: an attempt, some said, to intimidate the Texas governor. What congressional bill was Gore asking about?

“I voted for a man who said he was going to change things in a meaningful way for the middle class. … The financial recession has taken an enormous toll on my family. My husband and I have joked for years that we thought we were well beyond the hot-dogs-and-beans era of our lives, but quite frankly, it's starting to knock on our door and - and ring true that that might be where we're headed again. And, quite frankly, Mr. President, I need you to answer this honestly: Is this my new reality?” – Velma Hart, Obama supporter, in a CNBC town hall in September 2010

As the countdown to the town-hall debate begins at 9 p.m. ET, we can’t stop thinking of how one of the best questions that Barack Obama has faced in his presidency was not by a journalist but an average American: a working mom and American veteran named Velma Hart who asked him whether she had any reason to still hope for change.

The president tried to answer her – and took more than four minutes in an attempt that failed to connect. In the last hours of debate prep for Obama and Romney, we are wondering how they each can answer the patriotic concern and the sincerity of the struggle of Hart and the many Americans like her we are lucky enough to meet on the campaign trail. How can they connect to personal, economic hardship?

Americans look to the presidential debates for windows into whose vision and competence to trust in a world replete with uncertainties. That’s why Tuesday night’s debate is so important: Voters will get a chance to see the candidates answer direct questions from their fellow Americans about the struggles that face our nation and the challenges that lie ahead.

Simply put: The debate is a national gut check.

Leading CNNPolitics: John King: Stakes enormous in second debate
The expectations are very different for Obama vs. Romney, Round 2. And the stakes are enormous. Democrats are nervous. A race many of them thought was a lock just a few weeks ago is now a dead heat, the momentum with the other side. Republicans are upbeat, seeing a chance to not only build on the battleground state progress made as a result of the first debate, but also possibilities to expand the fight into states long thought safe in the Obama basket, Michigan and Pennsylvania chief among them. – John King

Leading Drudge: Gallup: Women Turning Away
A new USA TODAY/Gallup Poll of the Swing States shows Mitt Romney with a lead among likely voters as he strengthens his standing with women in the nation's top battlegrounds.

Leading HuffPo: Supremes: Ohio Early Voting Can Proceed
The U.S. Supreme Court on Tuesday rejected a last-gasp appeal by Ohio Republicans and approved early voting for Ohio residents on the weekend before Election Day. Ohio's Secretary of State John Husted had refused to enforce last week's appellate court decision, in which a three-judge panel came down on the side of the Obama campaign and blocked a law that would have limited early voting. – Dan Froomkin and Trymaine Lee

Leading Politico: 5 unmet promises of President Obama
President Barack Obama swept into office in 2009 with the strongest electoral mandate in a generation, majorities in both houses of Congress and promises of dramatic change in Washington. But that was no guarantee of success. – Josh Gerstein

Leading The New York Times: Town Hall Format Poses Risks for Obama and Romney
As President Obama and Mitt Romney prepare for their debate on Tuesday night, they face an unpredictable variable that was not a factor in their previous encounter: the common voter. Both presidential candidates have had some of their most awkward and politically fraught moments when confronted directly by voters. Tuesday’s debate will force as many as a dozen such encounters, any one of which could become a crucial moment in the campaign’s remaining weeks. – Michael Shear

Leading CNN Money: Bailout CEOs: 7 gone, 2 left
Another bailout CEO bites the dust. With the departure of Citigroup's Vikram Pandit on Tuesday, only two of the nine original CEOs still lead the big banks that received $125 billion in bailouts during the height of the financial crisis. – Jennifer Liberto

- Senior Romney adviser to John King: We like our new map -
“If you had told us a year ago that we would be three weeks out and in a jump ball race with a personally popular president and the outcome hinged on winning states that are traditionally GOP in presidential years, we would have taken that scenario in a heartbeat."

- Ryan on Biden’s debating: Not my kind of “temperament” -
PAUL RYAN IN AN INTERVIEW WITH WTNT IN VIRGINIA: “You know, I could tell, I could see what he was doing, because he was sitting right next to me. The way I look at this, that’s just not my style or my demeanor. That’s just not the kind of temperament I have, nor was it the way I was raised to try and have a debate like that. So I figured, he’s going to act like he’s going to act. I’m going to be me. … And that’s the way he chose to conduct himself and act, and I just wasn’t going to follow suit.”

- Hillary Clinton, after falling on the sword, stresses team effort -
CNN’s Elise Labott: We have an election coming up. Rationale is that this is to go against President Obama. But some people think it’s to stop Hillary Clinton from making any gains for 2016.
Secretary of State Hillary Clinton: That is just so far from anything that anybody should be thinking about.
Labott: They still see you as a threat, Secretary Clinton.
Clinton: Well, I can’t speak to that. The only threats I’m worried about are the threats to my men and women on the ground every day as we speak. It’s what I’m obsessed with. It’s what we’ve worked so hard to evaluate, and of course we’re part of a team. We’re a team with DOD; we’re a team with the intelligence community; we’re a team with the White House and other assets of the government.

Gut Check DVR: For Clinton’s debate advice for her former rival and current boss, tune in to CNN’s pre-game show at 7 p.m. ET.

- How the questions will get selected -
FRANK FAHRENKOPF, CO-CHAIR, COMMISSION ON PRESIDENTIAL DEBATES IN AN INTERVIEW WITH CNN: “First of all, they don't submit them to the commission. The only person who will see those questions is Candy. We have no control over it. We do not see them. As many are submitted, they've been told if they want to ask a question to write it down on two cards. One considered they'll keep with them so that if they are called on by candy, they'll have their question ready for her. She divides them into two stacks, foreign policy and domestic policy and she makes the determination.”

It was a brilliant moment of awkwardness: Vice President Al Gore literally standing up next to Texas Gov. George W. Bush during the town-hall debate in 2000.

“I specifically would like to know whether Gov. Bush will support the Dingell-Norwood bill, which is the main one pending,” Gore said.

After a brief refocus by moderator Jim Lehrer, Bush took on the question.

“The difference is that I can get it done, that I can get something positive done on behalf of the people,” Bush said. “That is what the question in this campaign is about. It’s not only what’s your philosophy and ‘what’s your position on issues,’ but ‘can you get things done?’ ”

Near the end of Bush’s answer, Gore stood and walked closer to the governor. Bush then turned to Gore and gave him a casual nod – a move that acknowledged his presence but also brushed it off.

The crowd broke into laughter, both candidates smiled, and Gore decided to take the opportunity to push Bush again. “What about the Dingell-Norwood bill?” Gore questioned with a smile.

What Gore was doing depends on whom you ask. Some said he was projecting masculinity, while others say he was looking to intimidate Bush. What happened, however, is that rather than coming across as masculine and intimidating, Gore’s move was criticized as grandstanding.

If you would like to get mentioned in Gut Check because of you trivia prowess, just follow @GutCheckCNN on Twitter and respond to our daily trivia question.