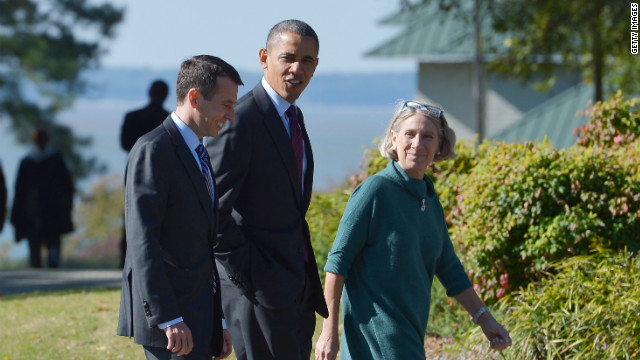 "I feel fabulous," Obama said as he strolled through the Kingsmill resort in Williamsburg, Virginia, where he has spent the last three days preparing for Tuesday's debate. The president was walking alongside David Plouffe, a White House adviser, and Anita Dunn, his former communications chief who is playing CNN chief political correspondent Candy Crowley, the debate's moderator, in the president's practice sessions.

"Look at this beautiful day," he continued, before telling the reporters, "I hope you enjoy the weather."

On Monday, the president's campaign released a photo of first lady Michelle Obama holding up an Illinois absentee ballot. Asked by reporters if he knew his wife voted for him, Obama smiled and said, "Thank goodness."

He did not respond to a question about Secretary of State Hillary Clinton taking responsibility in a CNN interview for the safety of American diplomats following the deadly attack in Benghazi, Libya that killed the American ambassador.