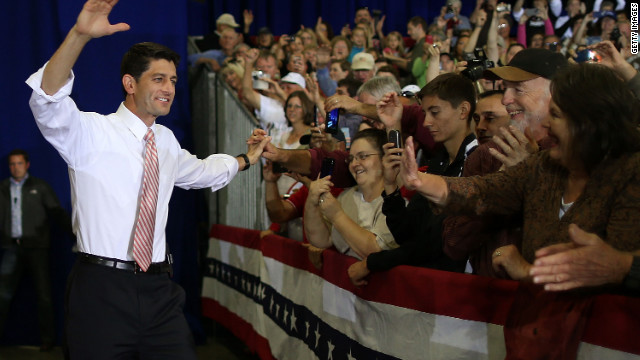 Fredericksburg, Virginia (CNN) - Paul Ryan pumped up a crowd in Fredericksburg hours before running mate Mitt Romney was set to take the stage for the second presidential debate with President Barack Obama.

"When we go home this evening, we will go and turn on our TV and we will watch we will see the choice. Put aside the hundreds of millions of dollars of distortion on TV, the clutter. You see the president can't run on his record," Ryan said Tuesday evening.

Before an audience of nearly 3,000 people at the Fredericksburg Expo and Convention Center, the Republican vice presidential nominee expressed confidence that Romney will perform as well as he did in the first debate in Denver on October 3.

"To do all of this, to make sure that we are offering you this clear choice, we need to elect a leader to do this. If there's one thing that you will see about Mitt Romney that you saw in his first debate, that you will see tonight, this man is a decisive leader," he said.

Ryan held rallies in Lynchburg and Fredericksburg in the battleground state of Virginia as Romney prepared for Tuesday night's town hall-style debate at Hofstra University in New York. In 2008, Obama picked up 64% of the vote in Fredericksburg, while Sen. John McCain won 35%.

The Wisconsin lawmaker suggested Democrats are unfairly characterizing the person at the top of the Republican ticket.

"You have to understand, the only way the president thinks he can win is if he can convince you to really dislike Mitt Romney and so he can win by default," Ryan said earlier at the outdoor rally in Lynchburg. "It's all he's got. It's as cynical as it gets and you are not going to fall for it are you?"

Ryan will watch the debate from his hotel room in Arlington, Virginia.