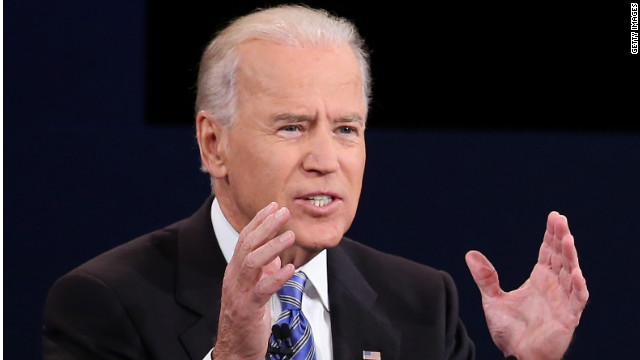 Biden: Romney bogged down in '1950s time warp in terms of women'

Greeley, Colorado (CNN) - What might June Cleaver of "Leave it to Beaver" think?

Seizing on Mitt Romney's "binders full of women" comment from Tuesday's presidential debate, Vice President Joe Biden mocked the Republican presidential candidate on Wednesday. And in a twist, Biden added a nostalgic knock, casting Romney as bogged down in a throwback time known more for women as homemakers and doting wives than as powerbrokers keeping pace with men.

"You heard the debate last night. When Governor Romney was asked a direct question about equal pay, he started talking about binders," Biden said. "Whoa! The idea that he had to go and ask where a qualified woman was, he just should have come to my house. He didn't need a binder."

Biden added: "What I can't understand is how he has gotten in this sort of 1950s time warp in terms of women," also referring to the Republican nominee's plans to defund Planned Parenthood.

Not intent to stop there, Biden also went after a comment made by a Romney adviser after the debate.

"His senior adviser said last night, in they call it the spin room…when they're asked about did Romney support [The] Lilly Ledbetter [Fair Pay Act], which is just basic, minimal justice, he said, Romney would have vetoed it."

Biden did not name which senior Romney adviser he was referring to. Yet one Romney adviser did state, after the debate, that Romney was not in favor of the act that helps establish equal pay for women versus men – a statement the adviser walked back on Wednesday.

"I was wrong when I said last night Governor Romney opposed the Lilly Ledbetter act. He never weighed in on it," Romney senior adviser Ed Gillespie said in a statement. "As President, he would not seek to repeal it."

Biden's comments came at his first public campaign event following the debate in Greeley, Colorado. The city, in the northern part of the state, is some 60 miles north of Denver.

Romney's "binder" comment has taken a life of its own. A Facebook page had 309,000 "likes" and the phrase has lit up the Twitterverse.

Given the ensuing attention and controversy, the phrase, it seemed, proved irresistible for the Obama campaign to pass up. On Wednesday from Iowa, President Obama made a passing reference to it.

"We don't have to collect a bunch of binders to find qualified, talented, driven young women ready to learn and teach in these fields right now," Obama said to supporters in Mount Vernon. "When young women graduate, they should get equal pay for equal work. That should be a simple question to answer."

Yet the Romney campaign is not taking the criticism lightly.

In addition to writing "when Mitt Romney talks about women, when he says he believes that we can do any job a man can do, I know from experience that he's speaking from the heart," Healey also wrote: "Of the twenty top positions in the Romney administration, ten of them were filled by women, more than any other state in the nation."

"People are hurting in this country, and women especially have been suffering. The numbers are stark. Five-and-a-half million women are unemployed. Under President Obama, the number of women living in poverty has climbed to a record high of nearly twenty-six million."