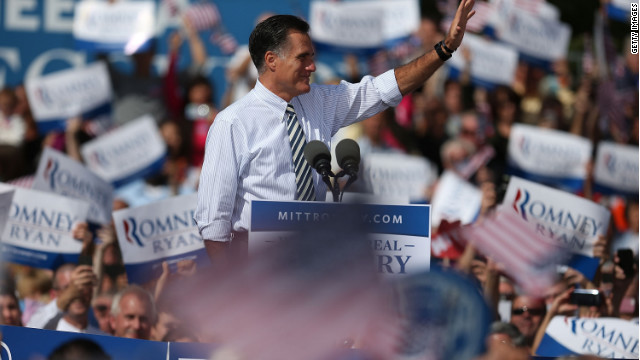 (CNN) - A new poll released Wednesday indicates Mitt Romney is gaining ground in Wisconsin, where the race is now tied up between the GOP presidential nominee and President Barack Obama.

Forty-nine percent of likely voters say they support the president, while 48% choose Romney, according to the Marquette University Law School poll, which was was conducted entirely before the second presidential debate Tuesday night.

The one-point margin falls well within the poll's sampling error and essentially wipes out a wider advantage Obama held over Romney in previous months.

Last week, a CBS/New York Times/Quinnipiac poll of Wisconsin likely voters showed Obama was ahead of Romney, 50% to 47%. And a separate Marquette poll conducted late last month indicated the president was up by 11 points in Wisconsin.

CNN rates the state, which has 10 electoral votes, as a "toss-up" on its Electoral Map. Obama carried Wisconsin by 14% against Sen. John McCain in 2008.

The state also marks the home of Romney's running mate, Rep. Paul Ryan. The GOP vice presidential nominee made a stop in Wisconsin on Monday.

"In Wisconsin we have shown that if leaders step up and lead we as voters have their backs. We haven't dedicated our electoral votes since 1984 to the Republican nominee. It is time we change that," Ryan said. "We are on a winning streak here in Wisconsin. Let's keep that winning streak going."

Romney's momentum in the state falls in line with gains made in other battlegrounds after his widely-acclaimed performance in his first showdown against Obama on October 3.

In the coming days, more polls will roll out measuring support following the second presidential debate, which was widely considered more of a draw than the first match-up. According to a CNN/ORC International Poll released late Tuesday night, 46% of debate watchers considered Obama the winner of the second debate, while 39% said Romney fared better. However, the GOP nominee came out on top among likely voters when they were asked who did better talking about the issues.

The new Marquette poll also shows a tightening Senate race between former Gov. Tommy Thompson, the GOP nominee, and Rep. Tammy Baldwin, the Democratic nominee. According to the survey, Thompson has 46% compared to Baldwin at 45%.

For the survey, 870 likely voters were interviewed by telephone between October 11 and October 14. The poll has a margin of error of plus or minus 3.4 percentage points.

- CNN's Shawna Shepherd and Paul Steinhauser contributed to this report.