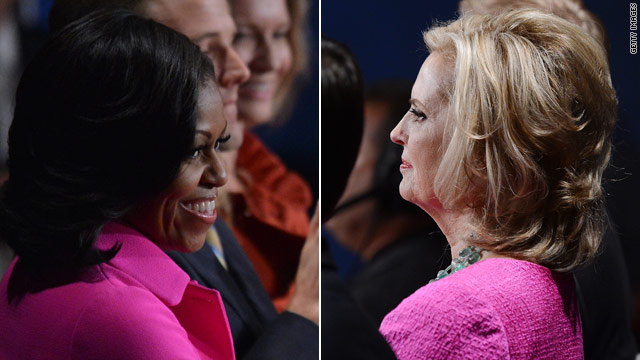 Pretty in pink and for a cause

(CNN) - Michelle Obama and Ann Romney's dresses drew attention at Tuesday's presidential debate first for their color, and second for the statement they may have made.

While their husbands clashed spectacularly onstage, Obama's and Romney's dresses bore more in common than one might expect of people with their two last names.

Both showed up in vibrant pink - which is the color of the breast cancer awareness effort, and October is National Breast Cancer Awareness Month.

President Barack Obama may have been in on the occasion, too. His suit was black, shirt was white, and tie was red, but tucked up his right sleeve was a pink wristband. He wore the wristband at a campaign event on Wednesday, and in early October, issued a proclamation saying in October "we honor those we have lost, lend our strength to those who carry on the fight, and pledge to educate ourselves and our loved ones about this tragic disease."

Michelle Obama wore her knee and sleeved length pink dress with a matching pink jacket and a pearl necklace. An Obama campaign official said the color was in honor of Breast Cancer Awareness Month.

Ann Romney topped her short-sleeved dress with an emerald necklace. She is a survivor of early stage breast cancer.

A spokeswoman for Romney's campaign did not return CNN's request for comment on whether Ann Romney's wardrobe selections were a nod to Breast Cancer Awareness Month.

But some on social media weighed in regardless.

Will the two spouses sport similar shades in the same room again? They'll have an opportunity next Monday, at the third presidential debate in Boca Raton, Florida.