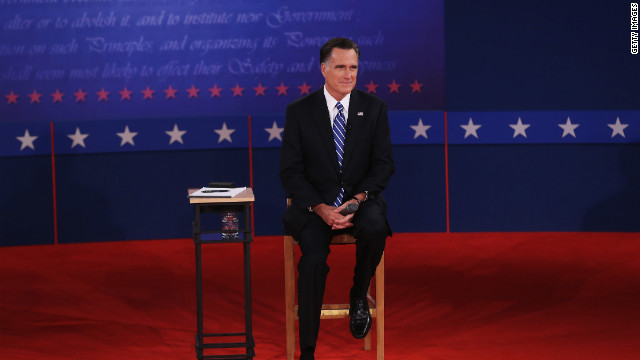 (CNN) - After a day dominated by Mitt Romney's "binders full of women" comment from the second presidential debate, the GOP presidential nominee defended himself against the tsunami of social media swipes and blatant jabs at Romney's expense.

"I understand the challenges women face and want to make it easier for them in the workplace," Romney wrote on Twitter Wednesday afternoon.

In his tweet, he also pointed to a video featuring women he worked with in the Massachusetts state government during his time as governor. One woman described him as "very, very sensitive" to women's issues in the workforce.

Ellen Roy Herzfelder, identified as a former Romney cabinet member, said "he totally gets working women, especially women, like myself, who had two young kids."

Also Wednesday, Kerry Healey, who served as Romney's lieutenant governor in Massachusetts, highlighted his background in hiring women. In an email to supporters, Healey said of the top 20 positions in the Romney administration, 10 were filled by women, including his chief of staff.

"Governor Romney wasn't just checking a box. He sought out our counsel, and he listened to our advice. We didn't always agree, but we were always respected," Healey wrote in the email.

Responding to a question about pay equality in Tuesday night's debate, Romney told a story about putting together his cabinet as governor. He said at the time he questioned his staff for recommending only male applicants.

"I went to a number of women's groups and said, 'Can you help us find folks,' and they brought us whole binders full of women," Romney said on the debate stage in Hempstead, New York.

At his own campaign event in Virginia, however, Romney sought to argue that he's best equipped to help women get back to work.

- CNN’s Rachel Streitfeld and Dana Davidsen contributed to this report.