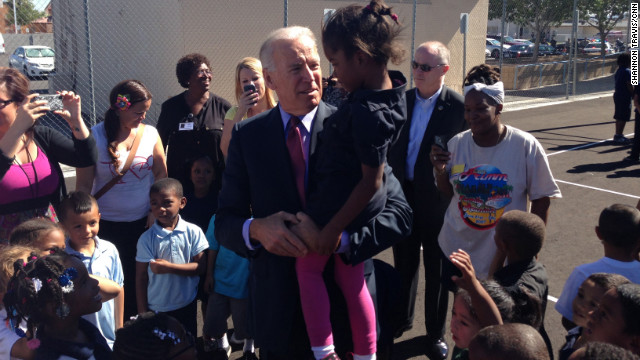 Biden shakes it up with 'Etch-A-Sketch' reference

Las Vegas, Nevada (CNN) - Long before binders and Big Bird, the outsized catchphrase of this election was "Etch-A-Sketch."

Nearly seven months after the children's toy had its fifteen minutes of fame on the campaign trail, Vice President Joe Biden remixed it with a recent campaign trail moment and unveiled the new hybrid line about Mitt Romney's tax plan at a rally in Nevada.

"As the president said the day after the debate Romney's plans were sketchy," Biden said, referencing a comment Obama made at Tuesday's debate and again since. "Well, folks I don't think they were just sketchy - I think they were Etch-A-Sketchy."

Biden was rallying supporters in Las Vegas, a city where both he and Republican challenger Mitt Romney have held six events each this general election.

He allowed that the Republican candidates are "decent men… good fathers… good husbands," but said their policies have Americans in their sights.

"Ryan has written a book called 'The Young Guns' with two other fellows, members of the House, these are the Republican leaders of the House," Biden said, referencing a book Ryan wrote with House Majority Leader Eric Cantor and Majority Whip Kevin McCarthy.

"Unfortunately," Biden continued, "the bullets are aimed at you."

Brendan Buck, a spokesman for Ryan, said the comments were "over-the-top rhetoric" that is "disappointing, but not all that surprising."

"In the absence of a vision or plan to move the country forward, the Vice President is left only with ugly political attacks beneath the dignity of the office he occupies," Buck said.

Biden criticized his opponents for their stances on abortion, an issue which returned to the spotlight after Romney said in a recent newspaper interview there is "no legislation with regards to abortion that I'm familiar with that would become part of my agenda."

He and his campaign later sought to clarify that he would support efforts to end federal funding for Planned Parenthood and would support judicial nominees who favor overturning Roe v. Wade.

Obama's campaign has hit Romney on the issue in television ads and on the campaign trail, as Biden did in Nevada.

"And after these debates, you have any doubt who they will likely appoint to the Supreme Court of the United States," he said. "How much chance do you think Roe v. Wade will survive after four years of a Romney Supreme Court?"

After the rally, the vice president visited a local elementary school where he mingled with kids on the playground.

"Everybody here gonna go to college?" Biden asked, as the fifth graders said they would.

Mingling with the students, he charmed them and their teachers.

"Thanks for letting me come to the playground," he said. "I wish we were coming to play basketball."

One child lodged a special request of the vice president-to send President Barack Obama to visit with them too. Biden assured them he'd put in the request and made sure to put in the good word for his boss.