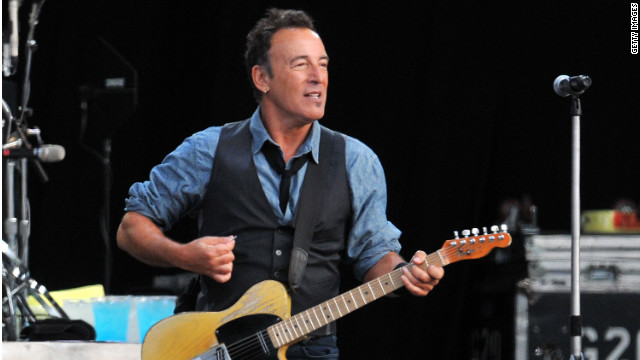 Parma, Ohio (CNN) - President Obama has concentrated his recent visits to Ohio on college towns, densely-populated Democratic strongholds where his campaign can shuttle big crowds of students directly from a rally to an early voting location.

But two of the president's most famous supporters campaigned for him on different turf on Thursday.

Bill Clinton and Bruce Springsteen hosted a rally in Parma, a mostly-white blue-collar suburb of Cleveland where General Motors is the top employer and union members sometimes vote Republican.

"This is the first time in my life I got to be the warm up act for Bruce Springsteen," Clinton joked to a crowd of roughly 3,000 supporters at Cuyahoga County Community College. "I am qualified because I was born in the U.S.A. And unlike one of the candidates for president I keep all my money here."

A succession of similarly plainspoken takedowns of Mitt Romney followed, as Clinton outlined the choice between Obama and his Republican challenger in trademark fashion.

It was clear that Clinton had been briefed on the message of the week for Democrats, who are working to portray the former Massachusetts governor as hostile to women in a bid to reverse the Republican's recent gains among female voters.

Clinton noted that Romney once refused to take a position on the Lilly Ledbetter Fair Pay Act, the first bill signed into law by President Obama in 2009. Romney's advisers have said he would not repeal the law, but have continued to dance around the question of whether Romney would have signed the bill.

"What he wants to do is convince the moderate voters that he's a new man without explicitly disavowing a single solitary commitment he made in the two years he said he was 'severe conservative' Mitt Romney," he said.

He also attacked Romney's opposition to the federal bailout of Chrysler and General Motors, a measure overwhelmingly backed by voters in Ohio, where one out of eight jobs are linked to the auto industry.

"I love Ohio," Clinton said. "It's an old school place. We like our families, we like our communities, we value our personal loyalty … The president had your back. You got to have his back now."

Springsteen took the stage after Clinton and joked that following the ex-president was like "going on after Elvis."

"I will now be going into President Obama's policies but in greater depth than President Clinton," he chuckled. "No, I don't think so."

He played an acoustic set that included "Youngstown," an ode to the northeastern Ohio manufacturing town, and a new ditty called "Forward And Away We Go," a theme song he said he penned for the president's re-election bid.

Later Thursday, Clinton will travel south to the Steubenville area – another white, working class region of the state - for another campaign event designed to drive up the early Democratic vote.

The Romney campaign has long been hesitant to attack Clinton, who polls show remains extremely popular.

But after the speech, Romney officials called attention to Clinton's admission during the speech that "we're not fixed" - as in, the economy hasn't been fixed under Obama (although the president has said repeatedly that he has more work to do on the economy).

The Romney campaign said "we can do better by creating 12 million new jobs with higher take-home pay, cutting spending to put our nation on course for a balanced budget, and actually fixing the economy."