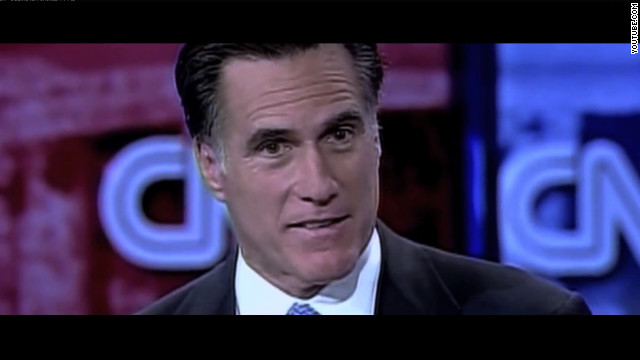 Obama's campaign on Thursday released a new television ad, "Seen," in response to a spot Romney's campaign aired on Wednesday.

Romney's ad aired on three television stations in the Virginia area, according to the political ad tracking firm CMAG, and the Obama campaign says their spot will run in Virginia.

While Romney's campaign usually announces a new television ad, the campaign did not release or post to their website an announcement of the Wednesday ad.

The narrator in Obama's ad references Romney's spot, then shows a clip from a 2008 Republican primary debate.

One of the moderators, CNN's Anderson Cooper, is seen asking, "If Roe v. Wade was overturned and Congress passed a federal ban on all abortions and it came to your desk, would you sign it, yes or no?"

"Let me say it. I'd be delighted to sign that bill," Romney answers.

The ad does not include the rest of Romney's response to the question.

Cooper's question was prompted by a viewer-submitted question, who posed the hypothetical that the Supreme Court had overturned the landmark ruling.

The Obama spot then condenses the nuance. "Banning all abortions?" asks the narrator, and Romney's reply: "I'd be delighted to sign that bill."

The narrator continues, "Trying to mislead us? That's wrong. But ban all abortions? Only if you vote for him."

Romney's Wednesday spot shows him as more moderate than some have suggested.

Abortion returned to focus after the Republican candidate said in a recent interview, "There's no legislation with regards to abortion that I'm familiar with that would become part of my agenda."

The candidate and his campaign sought to clarify that he would support efforts to end federal funding for Planned Parenthood and would support judicial nominees who favor overturning Roe v. Wade.

Obama's campaign did not say how much it would spend to air the spot.