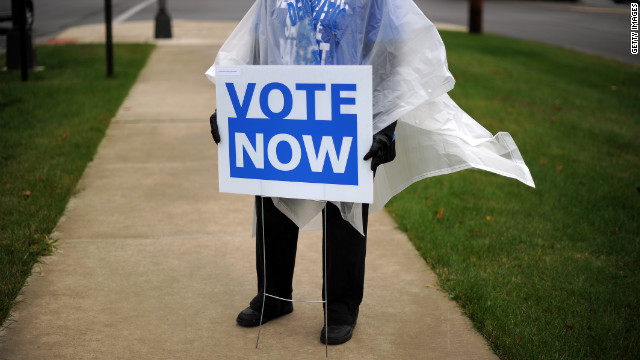 Middleburg Heights, Ohio (CNN) - They got smoked in the early voting game in 2008, but this time around Republicans are closing the gap with Democrats.

Most observers here expect the early vote to tilt toward President Barack Obama, as it did in 2008. The Obama campaign has worked overtime to get their supporters to vote early and successfully sued the Ohio secretary of state to keep early voting locations open through the weekend preceding Election Day.

Since early and absentee voting began on October 2, more than 1.4 million Ohio voters have voted or requested an absentee ballot. Almost a third of Ohio voted early in 2008, and Democrats expect that number to be even higher in 2012.

But Republicans have polished their early vote operation since 2008.

Four years ago, Democrats made up about 42% of the early and absentee vote while Republicans made up 22% - a dismal 20-point deficit that contributed to Sen. John McCain's defeat in Ohio.

Through Wednesday, however, the margin has narrowed: Democrats account for 36% of the early and absentee vote while Republicans make up for 29%.

Republicans are outperforming their voter registration in several of the state's biggest counties.

For instance, through Wednesday in Cuyahoga County, the largest county in the state and home to Democrat-heavy Cleveland, nearly a quarter million absentee ballots have been requested and some 80,000 have been returned. Those numbers strongly favor Democrats: 47,538 to 16,720 for Republicans. About 15,000 listed no party affiliation.

In Cuyahoga, Republicans only make up about 12% of registered voters. Ballot numbers through Tuesday of this week, however, signal that almost 22% of early voters in Cuyahoga are Republican.

Franklin County - which encompasses Columbus - trails Cuyahoga in absentee ballot requests but leads the state in the number of early in-person voters, according to the Columbus Dispatch. Registered Democrats voting early outnumbered Republicans by a 4-1 margin, the paper reported Thursday.

GOP officials, though, say their absentee and in-person voting turnout in Franklin is coming along nicely. Republicans account for just 16.5% of registered voters in the county, but make up 28.6% of early voting activity so far.

Additionally, a Republican National Committee source told CNN that among early voters not identifying with any party, RNC modeling has tagged 30.5% as Romney supporters and 24.9% as Obama supporters.

If correct, that gives the GOP a 5.6-point edge among unaffiliated early and absentee voters.

Ohio Democrats wave off the Republican boasting, and not without good reason.

Voters in Ohio do not register by party in traditional fashion. Instead, voters are only identified as Republican or Democrat based on their participation in a primary, making it difficult to know just where early vote sympathies lie.

Republicans had a competitive presidential primary earlier this year. Democrats did not. Is it possible someone that a Democrat in Toledo registered as a Republican to vote for Romney over Rick Santorum last March, but is now supporting Obama? Absolutely. But this hypothetical Obama supporter's absentee ballot would be marked Republican.

Recent public polls show Obama has a double-digit lead among early voters, and data shared by the Obama campaign reveals residents of precincts Obama won in 2008 are participating in early voting at a greater clip than those from precincts McCain won.

The bottom line: Few in either party question the Obama campaign's sophisticated ground game and most expect Democrats to bank more votes before Election Day. But Republicans have vastly improved their turnout effort in Ohio from the dog days of October 2008.