(CNN) - Three days before the final presidential debate, a new survey in the biggest of the battleground states indicates the race for the White House is basically tied.

According to a CNN/ORC International poll conducted Wednesday and Thursday, entirely after the second presidential debate, 49% of likely voters in Florida say they support Republican nominee Mitt Romney, with 48% backing President Barack Obama. Romney's one point margin is well within the survey's sampling error.

Monday, the final president debate, which will focus on international issues, will be held in Boca Raton, Florida.

With female voters and women's issues in the national spotlight this last week, the survey indicates the gender gap in Florida is much smaller than the generational divide or the income gap. The president has a narrow 49%-47% edge among women voters, with Romney holding a 50%-46% edge among men.

"This suggests that in Florida women are voting more on the basis of pocketbook concerns and issues that split young and old throughout the country," adds Holland.

According to the poll, the president and the former Massachusetts governor are tied among two key swing groups: Independent voters and suburban voters. 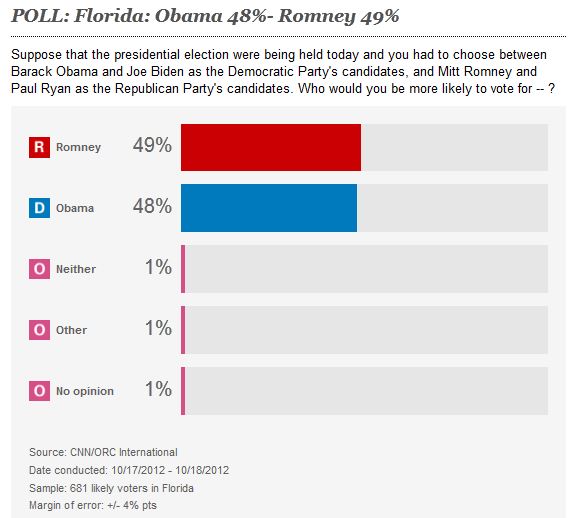 As always, keep in mind that the poll does not, and cannot, predict the outcome of the election in November. The survey indicates that one in twelve likely Florida voters say they could change their minds between now and Election Day, more than enough to affect a one-point race.

President George W. Bush won Florida in his 2004 re-election, but Obama narrowly captured the state in his 2008 victory over Sen. John McCain. This cycle Florida, where 29 electoral votes are up for grabs, has been getting tons of attention during the general election, with the candidates making frequent visits to the Sunshine State. The poll's release come just a few hours before Romney and Rep. Paul Ryan, the GOP running mate, team up for a rally in Daytona Beach. And it comes as Vice President Joe Biden makes a two day swing through the state.

The Obama and Romney campaigns are also spending big bucks on get out the vote efforts and to run television commercials in the state. The two presidential campaigns, the party committees, and the super PACs and other independent groups supporting the candidate, have shelled out more than $125 million to run ads on broadcast TV in Florida. That's according to data provided to its clients by Campaign Media Analysis Group (CMAG), which tracks campaign advertising. Twelve million of that spending has come just in the last week.

Three non-partisan, live operator polls of likely voters were conducted in Florida after the first presidential debate and before the second showdown. A CNN Poll of Polls which averaged all three surveys indicated Romney at 49% and Obama at 46%.

The new CNN poll was conducted by ORC International, with 1,030 adults, including 922 registered voters and 681 likely voters, questioned by telephone. The survey's sampling error for likely voters is plus or minus four percentage points.