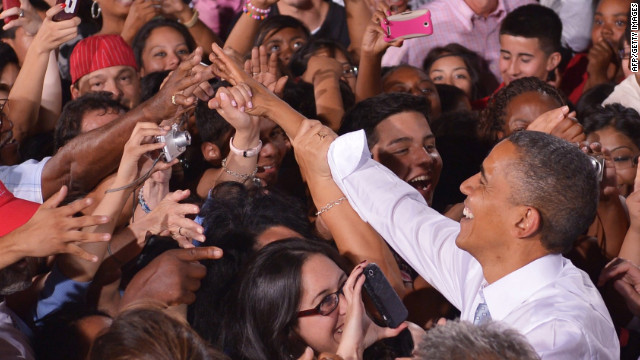 DEVELOPING: Unemployment falls in seven of the nine states CNN has identified as toss ups… Unemployment declined in 41 states in September, seven of which are key toss up states in the election. Ohio, which has 18 electoral votes, saw its unemployment rate decline to 7% in September, down from 7.2% just a month earlier.

But the news is not all rosy. Unemployment rates in Colorado, Nevada, New Hampshire and North Carolina all have higher rates than when President Barack Obama took office in January 2009.

TRAIL TRIVIA
(Answer below)
After next Monday’s debate, whom will President Barack Obama be tied with for the most appearances in a presidential debate?

The race for the White House will be won or lost in nine battleground states spread across the country. With only 18 days remaining until Election Day, we are turning to political experts from each state to help us better understand what is happening on the ground. Today, we turn to veteran Nevada political expert Jon Ralston, whose reporting can be found at ralstonreports.com and his daily political television show.

Gut Check: Public polling shows that Nevada is a true toss up state with both candidates having a shot at winning the state’s six electoral votes on November 6. What is your sense about who has an edge 18 days before Election Day?

RALSTON: “President Obama has the edge. Nearly every public poll all year has shown him with a slight lead. And in the last few months, the Democrats have dramatically increased their registration lead. It is now larger in Clark County (Las Vegas) than it was in 2008, when Obama won the state by 12 points. Obama's pollster here - Mark Mellman - has the president up by eight points. It may not be that big, but he is ahead in all credible polls I have seen.”

GC: What does each candidate need to do to convince the narrowing set of undecideds to vote for him?

RALSTON: “Romney and his allies need to persuade undecideds, especially Hispanics, who will make up 15% or so of the electorate, that the economy's devastation here is the president's fault. (Nevada’s unemployment rate is) still at 11.8% statewide, well above the national average. The GOP also has to energize the base enough to create such a turnout differential that the Democratic registration edge/machine can be overcome. The Democrats really just need a high base turnout and party loyalty to win the state. If there is an enthusiasm gap of any great size, Obama could lose here.”

GC: What is each candidate’s greatest strength in the state?

RALSTON: “Obama's greatest strength is the Democratic machine erected by Harry Reid two cycles ago. It boosted the president in '08 and Reid in '10 to improbable victories. There's no ground game like it. Romney's advantage is how bad the economy is and he has better people on the ground than the GOP had four years ago. McCain essentially abandoned the state; Romney is fighting for it on the air and on the ground.”

Leading CNNPolitics: Early voting surge suggests Democratic push pays off in Iowa
More than 2 million Americans have already cast ballots for president less than three weeks before Election Day with a substantial number coming in the battleground state of Iowa. The state, which holds six key electoral votes, is on pace to exceed the 1.5 million votes cast early in in 2008 - a trend that is not lost on either political party. – Allison Brennan

Leading Drudge: Obama on Comedy Central: 'When four Americans get killed, it's not optimal'
President Barack Obama, during an interview shown on Comedy Central, has responded to a question about his administration's confused communication after the Benghazi attack, by saying: 'If four Americans get killed, it’s not optimal.' – Toby Harnden for the Daily Mail

Leading Politico: Playing to donors, GOP groups spill secrets
For two years, outside money was a secretive game, with deep-pocketed conservative groups refusing to detail their methods or strategies — let alone discuss their donors. Nowadays, though, it seems like they won’t stop talking. – Kenneth P. Vogel

Leading The New York Times: Campaigns See Latino Voters as Deciders in 3 Key States
Mr. Obama and his supporters have outspent Mr. Romney and his backers nearly 2-to-1 on advertising on Spanish-language television stations in three of the most closely contested states — Colorado, Florida and Nevada — including a new advertisement in which Mr. Obama makes a personal appeal for support, speaking entirely in Spanish. Mr. Romney’s advisers have relied on a surge of ads across the television spectrum, saying that most Hispanics speak English and consider the economy, not immigration, the top issue. – Adam Nagourney and Fernanda Santos

- Obama tests his Romney attacks; today’s: ‘Romnesia’ -
PRESIDENT BARACK OBAMA AT A CAMPAIGN EVENT IN VIRGINIA: “He is forgetting what his own positions are and he is betting that you will, too. I mean he is changing up so much, and backtracking and sidestepping. We have got to name this condition that he is going through. I think it is called Romnesia.”

Gut Check Full Service: Kevin Madden, a senor Romney adviser, responds to the comments by stating, “Twenty-three million Americans are struggling to find work in this economy and yet President Obama can't get serious on the campaign trail. He's conducting a small campaign that fails to rise up to the big challenges the country is facing.”

- McCaskill, Akin try to define themselves in a testy Missouri Senate debate last night -
DEMOCRATIC SEN. CLAIRE MCCASKILLL: “I was disappointed when the president wouldn't support my spending cap. He was disappointed when I wouldn't go along with cap and trade. I was disappointed when he refused to quickly approve the Keystone Pipeline. For six solid years, I've been smack-dab in the middle.”
REPUBLICAN REP. TODD AKIN: “I've had a chance to travel for 18 months, and I've got a pretty good sense of where people are. My views are pretty much in sync with the voters of this state, and what's more, I've opposed the failed record and the failed policies which have given us the unemployment, the lack of jobs, and other miscellaneous problems such as gasoline prices doubling.”

- And in Ohio debate last night, “Senator, you are a liar!” -
DEMOCRATIC SEN. SHERROD BROWN: “On the auto rescue, to call that ‘Washington speak’ is a bit peculiar, because it kept tens of thousands of Ohioans at work. Josh Mandel’s view of politics and economics? Tax cuts for the wealthy trickles down. Mine is to focus on the middle class and build the economy out.”
REPUBLICAN STATE TREASURER JOSH MANDEL: “Senator, you are a liar. You are lying to the people of the state of Ohio. You are falsely attacking me, and I won't stand for it. You might want to try to push people around in Washington, but you're not going to push me around.”

- The candidates show their comedic side, joke about church, one another and Biden on Thursday night -
Gov. Mitt Romney: “Of course the president has put his own stamp on relations with the church. There have been some awkward moments. Like when the president pulled Pope Benedict aside to share some advice on how to deal with his critics. He said, ‘look Holy Father, whatever the problem is, just blame it on Pope John Paul II.’”
President Barack Obama: “Win or lose, this is my last political campaign. So I am trying to drink it all in. Unfortunately, Mayor Bloomberg will only let me have 16 ounces of it. … Ultimately, though, tonight is not about the disagreements Gov. Romney and I may have, it is what we have in common – beginning with our unusual names. Actually Mitt is his middle name. I wish I could use my middle name.”

Dan Friedman (@dfriedman33)
Again, too little was made of both Baldwin AND Thompson referring to him as "Tommy Thompson" during #wisen debate. http://bit.ly/VbdRy5

Karen Tumulty (@ktumulty)
What a difference a year makes? Subject line of latest fundraising email from Michele Bachmann: Help me get on Fox.

After Monday’s debate on foreign policy, President Barack Obama will be tied with former President George W. Bush for the most appearances in a presidential election debate. Both men will have appeared in six presidential debates.