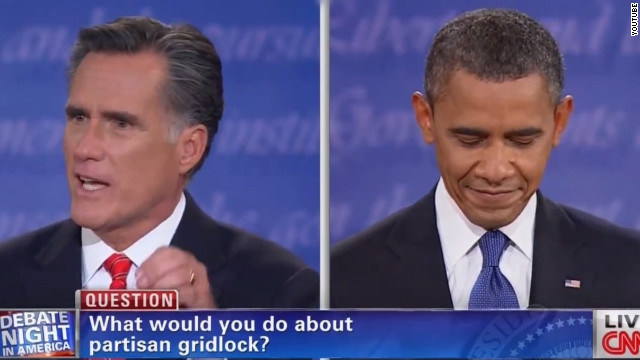 (CNN) – The latest television spot from Mitt Romney's campaign features the GOP candidate speaking at the first presidential debate about his commitment to working with Democrats.

The spot splices together bits of Romney's answer to a question about how he would work with members of the other party to advance important legislation.

"We have to work on a collaborative basis," Romney says in the spot.

Later, he's shown saying, "Republicans and Democrats both love America. But we need to have leadership-leadership in Washington that will actually bring people together and get the job done and could not care less if-if it's a Republican or a Democrat. I've done it before. I'll do it again."

Romney frequently talks up his record as Massachusetts governor, saying he worked with an overwhelmingly Democratic legislature to cut his state's deficits and pass health care reform. His rivals, however, claim his bipartisan record is overhyped, and that he often ignored the opposing party's requests. A report in the New York Times following the first debate indicated Romney vetoed much of the Democratic lawmakers' legislative initiatives.

The spot also reflects a growing attempt by Romney's campaign to highlight a more moderate candidate than the one on display during the fiercely fought Republican primary, which saw Romney battling against charges he wasn't a true conservative from rivals like former Pennsylvania Sen. Rick Santorum and former House Speaker Newt Gingrich.

A Romney campaign spot airing in Virginia media markets casts Romney as a moderate on reproductive rights, pointing out he doesn't oppose abortion in cases of rape, incest, or when a mother's life is at risk. On immigration, Romney has also struck a more moderate tone than during his primary slog, when he suggested a system of "self deportation" for undocumented immigrants.