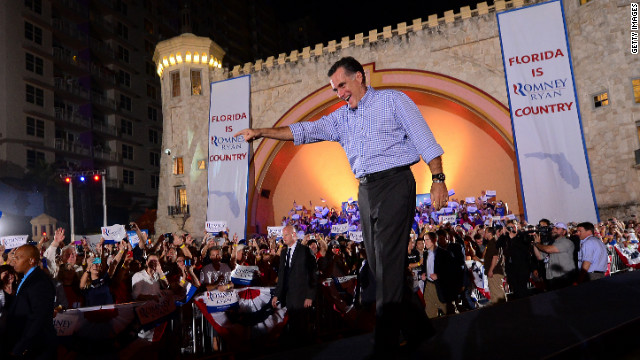 Romney on 'the incredible shrinking campaign'

The attack, which Romney delivered at the top of his 11-minute-long remarks, was an apparent response to Obama’s diagnosis of the GOP presidential nominee with “Romnesia” at a morning rally.

After an introduction from his running mate Paul Ryan in Florida, Romney wasted no time before launching immediately into the new charge.

“They've been reduced to petty attacks and silly word games. Just watch it,” Romney said. “The Obama campaign has become the incredible shrinking campaign. This is a big country with big opportunities and great challenges, and they keep on talking about smaller and smaller things.”

Earlier in the day, Obama had coined a new term to portray his rival as a flip-flopper.

“He told folks he was the ideal candidate for the tea party. Now suddenly he is saying, ‘what, who, me?’” Obama told a Virginia audience. “We have got to name this condition he is going through. I think it is called Romnesia.”

Democrats immediately seized on the line, trumpeting the so-called diagnosis across social media.

Romney’s Florida event came during the city’s annual celebration of Biketoberfest in Daytona Beach, where motorcycles rumbled through town late into the night.

“We can endure 18 more days of the agenda of President Obama, but we cannot endure four more years,” Romney told his sprawling audience Friday night. “And that's why we're going to replace him in 18 days.”